Physicists of IQOQI-Vienna show that there is a large number of entangled states in quantum physics that cannot be detected by conventional methods. Their results are published in the journal Physical Review Letters. 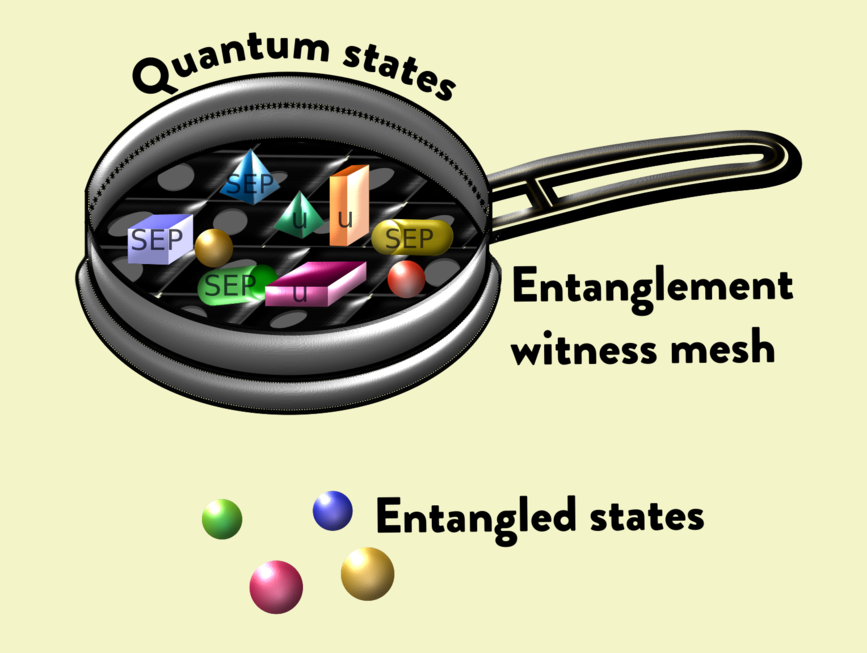 The tools for detecting entanglement are called "entanglement witnesses", represented here by the different holes in the mesh. In their work, the scientists of the Austrian Academy of Science show the limits of standard types of entanglement witnesses, proving that they fail at detecting entanglement in most quantum states, represented by the geometric solids. Like the mesh, these witnesses cannot separate a large class of entangled states that remain undetected (U) from the separable quantum states (SEP), which are states that are not entangled at all.

Entanglement is one of the fundamental concepts of quantum mechanics, and it plays a fundamental role in many promising technologies, from quantum computers to quantum cryptography. However, proving the presence of entanglement between two components of an experiment is not always an easy task. "In many experiments, a special situation in which the two components are maximally entangled is employed. In the case of two photons, for example, this can be a special superposition of their polarizations. These types of entangled states can be detected, there are standard methods for this", says Mirjam Weilenmann from the Institute for Quantum Optics and Quantum Information Vienna of the Austrian Academy of Sciences (ÖAW).

From a mathematical point of view, entanglement is demonstrated by constructing an abstract object, a so-called "entanglement witness". The standard construction of such entanglement witnesses works well for instance for maximally entangled states, but not for most of the other quantum states, as the physicists show in their recent article.

"One can imagine each possible state of a quantum system as a point within some large ball. Inside the ball, there is a smaller ball that contains the points that represent non-entangled states. We have shown that only the entangled states in the outer layers of the ball are accessible for the standard method," says Weilenmann, first author of the study.

The standard construction also rapidly reaches its limits in the detection of special properties of entangled states, for example for verifying the minimum number of degrees of freedom in which systems are entangled. However, being able to detect such high-dimensionally entangled states is of extreme importance for technological applications. In fact, such states can be used for instance to carry more information, or they can have better tolerance to environmental noise.

No adequate alternatives to standard methods

Even some of the entangled states commonly produced by quantum physicists in the laboratory can resist detection. "In certain strongly entangled states,  the identification of their entanglement via the standard methods is hindered by the presence of environmental noise. This issue is particularly relevant for experiments where relatively high levels of noise may be present," says Weilenmann. Although there are already some alternative approaches for the detection of entanglement, these can either only be used for specific cases or are highly inefficient.

The fact that the majority of entangled states cannot be confirmed using conventional methods has consequences for quantum physics experiments. "For quantum cryptography, we can stick to the entangled states that we are used to  and that are easily detectable. However, many other states occur in natural systems, and here too it would be interesting to characterise their entanglement," says Weilenmann. Internationally, several groups are working on the development of ways to make entanglement and its properties efficiently detectable in ever more general classes of quantum states. In this respect, the research group from Vienna also provides a new technique to detect high dimensional entanglement in all the cases not covered by the standard method.