In Bristol, researchers in cooperation with IQOQI-Vienna (Austrian Academy of Sciences) have built a network that allows quantum-encrypted communication between eight participants. The breakthrough is the key that is generated and distributed centrally, as the team now reports in Science Advances. 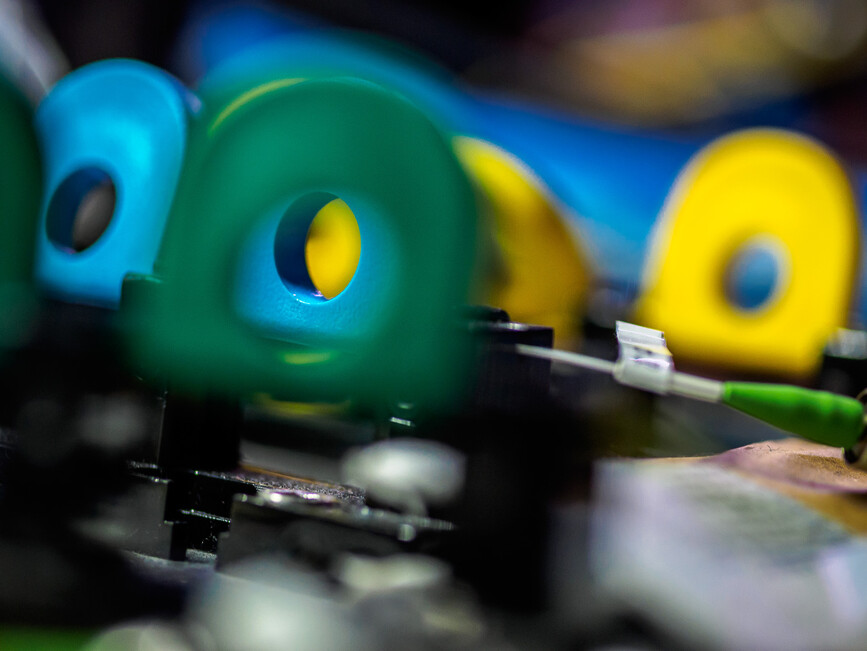 By using quantum entanglement, the researchers were able to create a secure quantum network of 8 users using only 8 fiber connections, instead of the 28 a classical network would require. This is a huge cost safer and makes the implementation much simpler and expandable to many more users. Credit: ©IQOQI-Vienna (ÖAW)/Mateusz Kotyrba

Quantum technology should in the future enable communicating in an entirely eavesdrop secure and encrypted way. This will be achieved by sharing entangled photon pairs between the parties who want to exchange messages. In this way, thanks to quantum physics, it is possible to generate a key that cannot be cracked. Quantum communication between two participants is already in use today. However, if several communication partners had to be linked in the same way, all participant would have to be connected to each other. This would require using a lot of expensive hardware.

Researchers from Bristol, Zagreb and the Austrian Academy of Sciences (ÖAW) in Vienna have built in Bristol a quantum encryption network with a centralized architecture that works much more efficiently. The international team now reports the results of the experiment in the journal Science Advances.

In the middle lies the power

"We used a central source of entangled photons, to which each of the eight network participants was connected via optical fibers. In the experiment, the detectors of the individual participants were all in the same room, but the glass fibres through which the photons are exchanged ran for several kilometers all over Bristol," says Sören Wengerowsky, who was involved in the experiment from the Institute for Quantum Optics and Quantum Information of Vienna at the Austrian Academy of Sciences. The quantum encryption in the network works thanks to the central source, that generates entangled photon pairs and distributes them separately to the network participants. The network participants measure when photons arrive and publish the arrival times.

"If two network participants want to communicate, they have to find photons arriving at the same time. These are then part of an entangled pair and can be used for encryption. Since we use different wavelengths, the communication partners can concentrate on the relevant wavelength and ignore the remaining photons. This also works for several parallel connections," says Wengerowsky. The actual communication does not take place via the quantum network. Only the unbreakable key is generated here; the message encrypted in this way can then be sent over a normal Internet connection. For optimal security, however, the key must be bit for bit the same size as the message to be transmitted, regardless of whether it is text, audio or video material.

Dreams of the future: Cloud of quantum computers

The key does not have to be created in real time. Participants in the quantum network can also stockpile the photons that form the key. "We kept the network running for 17 hours in the experiment and achieved data rates between five and 300 bits per second," says Wengerowsky. This is still not enough to implement the most secure variant of encryption for data volumes such as those commonly sent back and forth in today's Internet. "There are technical possibilities to improve the data rate. I'm not sure that every YouTube video really needs to be secured with this type of encryption anyway, even though it might be technically possible," says Wengerowsky.

Nevertheless, the new network architecture for quantum encryption could be an important building block for a future quantum Internet. "In theory, the number of network participants can easily be scaled up with our architecture, even if it is technically challenging. We can also combine our method with point connections and other methods, for example to bridge greater distances. A future quantum Internet will probably rely on a mix of different architectures," says Wengerowsky.

In the future, the researchers will try to further exploit the potential of their network architecture. "By adding a software for user login, our experiment should become more similar to traditional networks. There are also other possible applications. The technology could also be used to interconnect quantum computers to form networks, and thus create a cloud of quantum computers," says Wengerowsky.