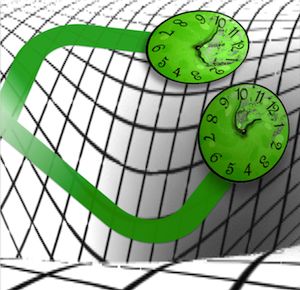 The unification of quantum mechanics and Einstein's general relativity is one of the most exciting and still open questions in modern physics. General relativity, the joint theory of gravity, space and time gives predictions that become clearly evident on a cosmic scale of stars and galaxies. Quantum effects, on the other hand, are fragile and are typically observed on small scales, e.g. when considering single particles and atoms. That is why it is very hard to test the interplay between quantum mechanics and general relativity. Now theoretical physicists led by Prof. Caslav Brukner at the University of Vienna propose a novel experiment which can probe the overlap of the two theories. The focus of the work is to measure the general relativistic notion of time on a quantum scale. The findings will be published this week in "Nature Communications".