The quantum movements of a small glass sphere could be controlled for the first time in Vienna by combining microscopy with control engineering, setting the course for future quantum technologies. 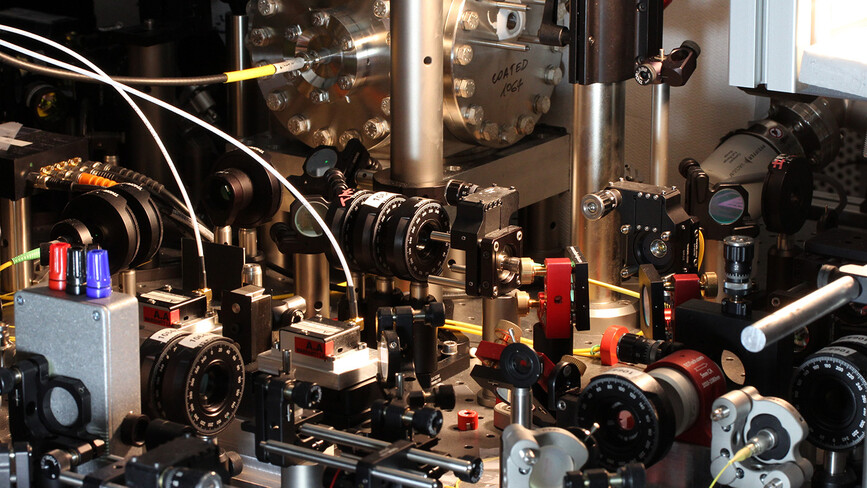 Image of the experimental setup, detail of the optics used to direct and manipulate light trapping the nanoparticle. © Lorenzo Magrini/Aspelmeyer Group/University of Vienna

A football is not a quantum particle. There are crucial differences between the things we know from everyday life and tiny quantum objects. Quantum phenomena are usually very fragile. To study them, one normally uses only a small number of particles, well shielded from the environment, at the lowest possible temperatures.

Through a collaboration between the University of Vienna, the Austrian Academy of Sciences and TU Wien, however, it has now been possible to measure a hot glass sphere consisting of about one billion atoms with unprecedented precision and to control it at the quantum level. Its movement was deliberately slowed down until it assumed the ground state of lowest possible energy. The measurement method almost reached the limit set by Heisenberg's uncertainty principle - physics just does not allow for any more precision than that. This was made possible by applying special methods from control engineering to quantum systems. The results have now been published in the scientific journal "Nature".

The measurement influences the measured object – this is one of the most basic principles of quantum theory. "Werner Heisenberg came up with a famous thought experiment – the so-called Heisenberg microscope" explains physicist Lorenzo Magrini, the first author of the study from the University of Vienna. "If you want to measure the position of an object very precisely under a microscope, you have to use light with the shortest possible wavelength. But short wavelength means higher energy, so the movement of the particle is disturbed more strongly." You just cannot accurately measure the location and the state of motion of a particle at the same time. The product of their uncertainties is always limited by Planck's constant - this is the so-called Heisenberg uncertainty principle. However, it is possible to find out how close one can get to this limit set by nature.

Markus Aspelmeyer's team at the University of Vienna is investigating this using a glass sphere with a diameter of less than 200 nanometres, consisting of about one billion particles - very small by our everyday standards, but still very large compared to objects usually studied in quantum physics.

The glass sphere can be kept in place with a laser beam. The atoms of the sphere are heated up by the laser, and the internal temperature of the sphere rises to several hundred degrees Celsius. This means that the atoms of the glass sphere are wobbling around violently. In the experiment, however, it was not the wobbling movements of the individual atoms that were studied, but the collective motion of the sphere in the laser trap. "These are two completely different things, just as the movement of a pendulum in a pendulum clock is something different from the movement of the individual atoms inside the pendulum," says Markus Aspelmeyer.

The goal was to precisely control the pendulum motion of the glass sphere on a quantum level, even though the glass sphere is actually a macroscopic object. This can only be achieved using a perfectly designed control system, carefully adjusted to the experiment. This task was taken on by the team of Andreas Kugi at TU Wien.

"Control engineering is about influencing systems in such a way that they exhibit a desired behaviour independent of disturbances and parameter fluctuations," says Andreas Kugi. "This can be a robot arm, for example, a production line in a factory, or even the temperature of a blast furnace." Applying modern methods of control engineering to quantum systems opens up new possibilities. "However, one also has to face challenges that do not exist in classical system theory and control engineering," explains Kugi. "In classical control engineering, the measurement has no or negligible influence on the system. In quantum physics, however, this influence cannot be avoided, for very fundamental reasons. We therefore also have to develop novel control engineering methods."

This was a success: the light backscattered by the glass sphere was detected as thoroughly as possible, using a sophisticated microscopy technique. By analyzing the scattered light, the position of the sphere was determined in real time, and then an electric field was continuously adjusted in such a way that it permanently counteracted the movement of the glass sphere. In this way, it was possible to slow down the entire sphere and put it into a state of motion that corresponds to the quantum-physical ground state, i.e. the state of the smallest possible kinetic energy – despite the fact that it is a relatively large object at high temperatures, whose atoms wobble vigorously.

"You always have to consider spatial and kinetic uncertainty together. Overall, the quantum uncertainty of the glass sphere was only 1.7 times Planck’s quantum of action," says Lorenzo Magrini. Planck’s constant would be the absolute theoretical lower limit, never before has an experiment come that close to the absolute quantum limit using an object of this size. The kinetic energy measured in the experiment corresponded to a temperature of just 5 micro-Kelvin, i.e. 5 millionths of a degree above absolute zero. The movement of the glass sphere as a whole can therefore be assigned an extremely low temperature even if the atoms that make up the sphere are very hot.

This success shows the great potential of this new combination of quantum physics and control engineering: both research groups want to continue working in this direction and exploit know-how from control engineering to enable even better and more precisely controlled quantum experiments. There are many possible applications for this, ranging from quantum sensors to technologies from the field of quantum information.