Quantum mechanics is famous for its indeterminism, but we can usually use probabilities to quantify our uncertainty about future observations. However, a team of researchers at the University of Vienna, the IQOQI Vienna (Austrian Academy of Sciences) and the Perimeter Institute for Theoretical physics have recently shown that in certain extreme quantum scenarios it is not possible to make such probabilistic predictions, provided that certain key assumptions of quantum mechanics hold true. This work, published in Communications Physics, sheds some light on the debate concerning the interpretation of quantum mechanics. 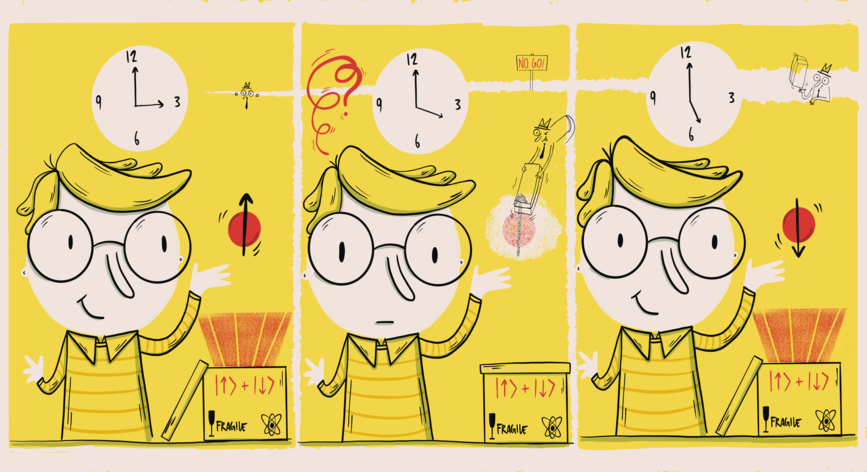 An observer (Wigner’s friend) performs a quantum measurement on a spin system. Later, Wigner measures the friend and spin in an entangled basis. As a consequence of this measurement, not only does the friend not reliably remember his past observed outcome, but cannot even quantify this ignorance with a reasonably behaved probability distribution. (© Aloop, IQOQI-Wien, Österreichische Akademie der Wissenschaften)

In 1961, the Nobel prize winning theoretical physicist Eugene Wigner proposed what is now known as the Wigner's friend thought experiment as an extension of the notorious Schroedinger's cat experiment. In the latter, a cat is trapped in a box with poison that will be released if a radioactive atom decays. Governed by quantum mechanical laws, the radioactive atom is in a superposition between decaying and not decaying, which also means that the cat is in a superposition between life and death. What does the cat experience when it is in the superposition? Wigner sharpened the question by pushing quantum theory to its conceptual limits. He investigated what happens when an observer also has quantum properties.

In the thought experiment an observer, usually called Wigner's friend, performs a quantum measurement and perceives an outcome. From the point of view of another observer, called Wigner, the measurement process of the friend can be described as a quantum superposition. The fact that quantum theory sets no validity limits for its application leads to a clear tension between the perception of the friend, who sees a specific single result, and the description of Wigner, who observes the friend in a superposition of different perceptions. This thought experiment thus raises the question: What does it mean for an observer in a quantum superposition to observe the result of a measurement? Can an observer always trust what they see and use this data to make predictions about future measurements?

In their recent paper published in Communications Physics, a team of researchers, led by Caslav Brukner,  from the University of Vienna, the Institute of Quantum Optics and Quantum Information (IQOQI-Vienna) of the Austrian Academy of Sciences and the Perimeter Institute for Theoretical Physics investigate the limits that Wigner's friend's thought experiment imposes on an observer's ability to predict their own future observations. To this end, the authors identify a number of assumptions, all traditionally considered to be at the core of quantum formalism. These allow an observer in standard experimental situations to predict the probabilities for future outcomes, on the basis of their past experiences. The assumptions constrain the probabilities to obey quantum mechanical laws. However, the researchers prove that these assumptions for Wigner's friend cannot all be satisfied in the thought experiment. This work raises important questions about the "persistent reality" of the friend's perceptions. Indeed, the authors show that in a Wigner's friend scenario, it is impossible to consider the friend's perceptions to be coexistent at different points in time. This makes it questionable whether a quantum observer in general can consider their own past or future experiences to be as real as their present ones. Philippe Allard Guérin, the lead author of the study, says "Our work shows that at least one of three key assumptions of quantum mechanics must be violated; which one depends on your preferred interpretation of quantum mechanics."