A collaboration between Armin Tavakoli - postdoc at IQOQI Vienna - and researchers at French and Swiss research institutions has discovered that entanglement swapping experiments based on a new type of entangled measurement can give rise to a qualitatively different type of quantum nonlocality in networks. The work, recently published in Physical Review Letters, is a step towards confirming the long-held suspicion that networks reveal insights to quantum theory that are beyond the reach of traditional Bell experiments. 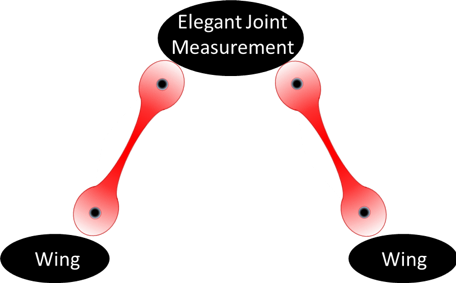 Bell’s theorem is a milestone of quantum theory. It is at the heart of the foundational research into the quantum world and it has catalyzed the field of quantum information science over the last decades. In the decade most recently passed, research on Bell’s theorem moved beyond the famous scenario of the Einstein-Podolsky-Rosen paradox and instead entered a new domain, namely quantum networks. Quantum networks are structures that involve many observers and many independent sources of entangled particles. From a conceptual point of view, networks offer an exciting avenue for nonlocality since they enable new types of quantum phenomena, such as entanglement swapping, to impact quantum predictions. Networks elevate the entanglement in measurements to a level on par the entanglement of states. From a practical point of view, real-life quantum networks are today developing rapidly and understanding their ability to support genuine quantum phenomena is more relevant than ever.

In recent years, many Bell inequalities have been proposed for detecting quantum nonlocality in networks and many experiments have confirmed their violations. However they have all been, in one way or the other, based on intuition earned from the past exploration of traditional Bell experiments. The recent work breaks away from this intuition. Focusing on the simplest quantum network, it identifies network Bell inequalities that cannot be traced back to standard Bell inequalities. In a similar spirit, it is found that these inequalities can be violated in quantum theory using protocols that do not reduce to ordinary quantum nonlocality. This take on network nonlocality is made possible by shifting the focus away from the celebrated Bell state measurement and instead onto a much more recently proposed measurement – the so-called “Elegant Joint Measurement”. This entanglement swapping measurement earns its name from its appealing geometrical properties. The combination of a quantum network and the elegant geometry of this measurement enable this alternative form of quantum nonlocality in networks.

Although it still remains a matter of argument whether network nonlocality truly is different from traditional nonlocality, the present work further tips the scales in favor of a positive answer. For those who are still not convinced, the room for doubt continues to shrink. For those who are convinced, it is becoming increasingly interesting to explore the new aspects of quantum theory revealed only in quantum networks.