Armin Tavakoli, new PostDoc at IQOQI-Vienna, investigates with his international co-authors the role of outstanding and elegant quantum measurements in generating the strongest forms of quantum phenomena (Bell's nonlocality). The results, published in the journal Science Advances, show that these measurements can be certified in Bell inequality tests and that this enables high efficiency applications in high-dimensional secure quantum communications. 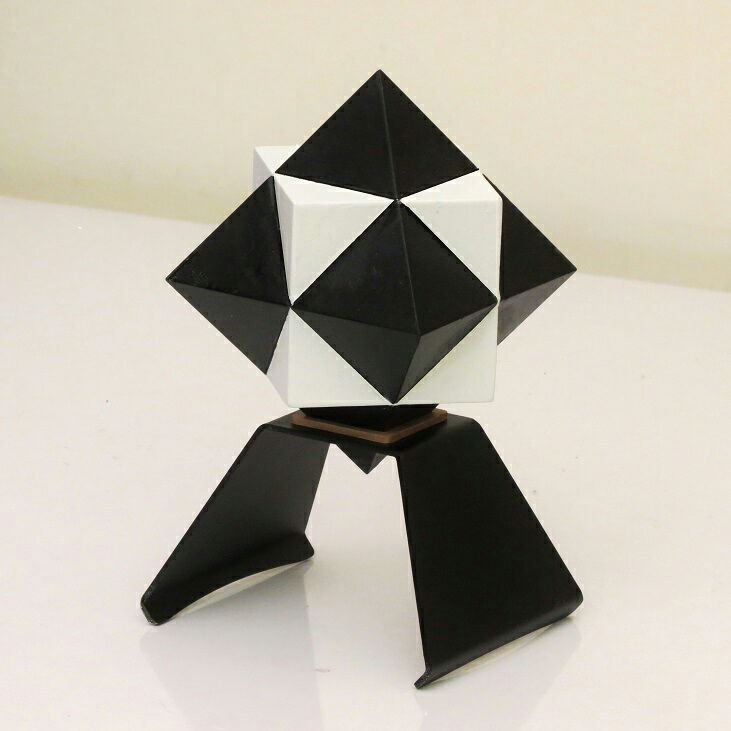 Qubits can be represented geometrically as points on a sphere. There exists 3 Mutually Unbiased Bases (MUBs) and 2 Symmetric Informationally Complete projectors (SICs) for qubits. Since each MUB has two outcomes, the 3 MUBs correspond to six points. These points are the vertices of the octagon sitting inside the sphere (black solid). Similarly, since each SIC has four outcomes, the 2 SICs correspond to eight points. These points are the vertices of the cube sitting inside the sphere (white solid). The statue displays the cube and octagon as they would look inside this sphere representing qubit systems. Credits: this statue was made in Iran by Armin Tavakoli's uncle Ali Tavakoli and given as a gift to Prof. Nicolas Gisin.

Quantum measurements, in their diverse shapes and forms, constitute the bridge between the abstract formulation of quantum theory and the concrete data produced in laboratories. Appropriate measurements can give rise to experimental statistics that cannot be explained through classical models. Hence, they are indispensable for harvesting and revealing quantum phenomena in the laboratory. Therefore, sophisticated manipulation of quantum measurements is at the heart of the most groundbreaking applications of quantum physics, such as quantum cryptography and quantum computation, as well as at the heart of the most well-known features of quantum theory.

Quantum theory features a variety of types of measurements, that implement different ways of extracting information from a physical system. In the broad landscape of quantum measurements, certain classes of measurements stand out from the crowd due to their relevance in foundations of quantum theory, their practical usefulness for applications in quantum technologies or their sheer mathematical elegance. In their new study, the researchers investigate two of these outstanding classes of measurements, which are broadly used and intensively studied in quantum physics: Mutually Unbiased Bases (MUBs) and Symmetric Informationally Complete projectors (SICs).

The scientists show that these classes of measurements can generate the strongest forms of quantum phenomena: Bell's nonlocality. Bell's nonlocality manifests itself when two separated observers, here called Alice and Bob, perform measurements on spatially separated quantum systems and observe between them stronger correlations than those accountable by classical physics. In their work, the researchers demonstrate that if Alice and Bob employ the proposed outstanding measurements, the observed correlation is the strongest allowed in quantum theory. This is of paramount importance for quantum technologies, where such quantum correlations play a key role.

Finally, all this is put to applications in two practically relevant tasks: quantum key distribution and quantum random number generation. Both these tasks are employed in secure communication. Quantum random number generation is the task of certifying that the data generated by a party cannot be predicted by a malicious eavesdropper. In quantum key distribution, Alice and Bob aim to establish a shared data set (a key) that is secure against a malicious eavesdropper, which can then be used to encrypt and decrypt their messages and hance communicate securely. In their theoretical study, the researchers harvest the Bell nonlocality to present proof-of-principle protocols for both these tasks: it is shown that high-rates of random numbers and secure key can be obtained under the most rigorous security framework. These results reveal the potential of high-dimensional quantum systems in applications based on Bell inequality tests.