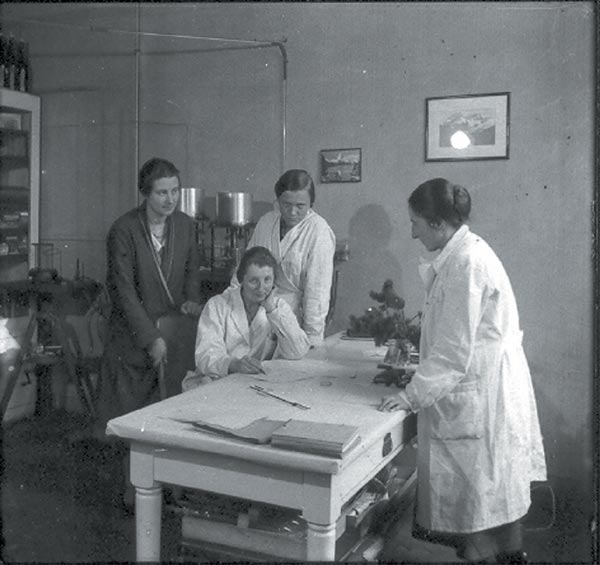 From left to right: Berta Karlik, Elizabeth Kara-Michailova, Elizabeth Rona, and another woman working at the Institute for Radium Research in Vienna ca. 1920s. (Personal archive of Agnes Rodhe)

As this work has now been organized after several years of tentative efforts each collaborator has his or her particular share to take in making the practical preparations necessary for an experiment. Besides each has his or her particular theme for research which he pursues and where he can count on the help from one or more of his fellow workers.”[1] The use of both possessive pronouns—his and her—in scientific reporting is surprising if not totally unexpected during the early twentieth century. Yet, when Hans Pettersson, a Swedish physicist working at the Institute for Radium Research in Vienna, submitted a report to the International Education Board in April 1928, he used both pronouns—his and her—, acknowledging not only the men in his group but also the presence of several female physicists and chemists working on artificial disintegration. Among them was also his wife, Dagmar Wendel-Pettersson.

At the time, Pettersson conducted research on the artificial disintegration of light elements and attracted external funding from the Rockefeller Foundation. The need for specialized personnel led a considerable number of women to engage in radioactivity research. A second group working under the direction of Karl Przibram, the Viennese physicist who discovered the effect of radio-photoluminescence in 1921 and explored the phenomenon of thermoluminescence, included also many female scientists. In fact, between 1919 and 1934, more than one third of the institute's personnel were women. They were not technicians or members of the laboratory support stuff but experienced researchers or graduate students who published at the same rate as their male counterparts. They formed their own research groups and worked alongside some of the best-known male physicists in the field. During the 1920s, researchers such as Ewald Schmidt, Max Kindinger, Marietta Blau, Elizabeth Rona, Berta Karlik, and Elizabeth Kara-Michailova formed a closely connected group, advised younger female graduate students such as Hertha Wambacher, Theodora Kautz, Erna Bussecker, Felicitas Weiss-Tessbach, Selma Schneidt, and Elsa Holesch, and boosted the institute to one of the most prestigious radioactivity centers in Europe.

But while in Vienna women thrived in radioactivity research, there were barely any women in Ernest Rutherford’s institute in Cambridge and there were only a few female scientists working at Otto Hans’ and Lise Meitner’s group in Berlin, both specialized in radioactivity research. What did make Vienna exceptional? The interdisciplinarity of the field offered women the chance to follow careers in oceanography; allowed them to find employment in hospitals and medical clinics and explore opportunities in medical physics while academic positions were scarce and preserved for their male colleagues. The institutional and political context, however, made the difference and explains gender diversity among radium institutes during the interwar period. It was the unique constellation of progressive politics and supportive, politically aware personalities that created the local conditions enabling women to play major roles in the field of radium research in the socialist Vienna.