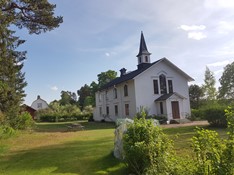 The Free Church of Mehedeby, built in 1898. Partly owned by IQOQI postdoc Armin Tavakoli. Thanks to a participant of Quantum Confessions, Google Maps now knows it under the name Quantum Church.

IQOQI Vienna joins the University of Geneva, the University of Stockholm and two cultural funds in support of a science conference in a 125-year-old Swedish village church. The project Quantum Confessions, largely propelled through the volunteer work of non-scientists, addresses the preservation of cultural history and the marginalization of the countryside, while providing a unique conference experience to frontier researchers in quantum information science.

On the highway north from Uppsala, Sweden, motorists often notice a strange, cartoonish-looking Chinese tower, which has since been abandoned. Much less noticed is the neighboring village Mehedeby, with its less than 600 inhabitants. Although the village mostly is a collection of houses for commuters, it is also home to a Church, where religious services have long stopped.

In a country strongly associated with modernity, where Christianity has long ceased to be the norm, it may be a surprise that until 1809 citizenship was tied to weekly church attendance and that until 1868 religious meetings outside the Lutheran Church of Sweden were forbidden. However, with the advent of freedom of religion south on the continent and the spread of literacy in Sweden, came a popular movement for väckelse – a personal awakening – based on the belief in every person’s right to read the Bible and discuss its meaning with likeminded peers. Although heretics in the eyes of the state, these rebels of thought eventually went on to lay the foundation of over 500 independent, mostly rural religious communities called frikyrkor – Free Churches. Most of these Free Churches had a simple principle: one member, one vote, consequently becoming the first democratic organisations in Sweden. However, due to the rapid decline of Christianity in Sweden in the second half of the 20th century, the majority of these historical churches have by now either been demolished or re-purposed. However, built in 1898, the Free Church of Mehedeby still stands.

A villager donated the land. The movement donated the money. The congregation itself cleared the land, laid the stone foundation and discussed the design. Besides electricity being introduced in 1917 and the Christian interior design being re-painted in 1923, the Church has largely remained in its original state. In 2008, it was sold for a pittance to the former chief editor of Sweden’s largest daily newspaper, Arne Ruth, who also happens to be its neighbor. Since then, the Free Church of Mehedeby has transformed into a secular version of what it originally was intended to be. Today it houses over 30 000 books and over 100 historical radio sets. Arne Ruth calls it “a home of the written and the spoken word”. From 2017 onward, as the ownership started to be shared with the family of IQOQI postdoc Armin Tavakoli, the idea was put forward to make the village and its Free Church the site of a major event: an international conference for fundamental physics research.

“What could be more apt than holding a conference on science, which is ideally the core of all freedom? Welcome to Mehedeby and to our Free Church.” – Conference opening speech of Arne Ruth.

The project was named Quantum Confessions . Its three-fold cause, namely to offer a unique contribution to a scientific community while also establishing an argument for the preservation of the church and highlighting a part of the countryside that would otherwise remain obscure, has attracted considerable volunteer work from people with no connection to neither physics nor Mehedeby. An administrator worked weekends to supply equipment, a retired IT security worker transported it, a retired builder renovated the priest’s apartment, a craftsman built a stage on the altar, a machine learning researcher set up the internet and the sound system, a water treatment worker organized the information distribution, a retired accountant cleaned the 125-year-old interior and a geologist prepared the coffee breaks. The project has likewise attracted financial support, from two cultural institutions, namely Längmanska Kulturfonden and The Foundations Lars Hiertas Minne, recognizing the social and cultural value of the project, moreover from two science institutions, the University of Geneva and IQOQI Vienna.

Forty-two researchers from groups located in nine different countries participated. The main topical focus was on quantum correlations, in both quantum information science and foundations of quantum theory. Major themes included Bell nonlocality, entanglement, steering, geometry of quantum states, computational and statistical methods in quantum information, quantum communication and quantum computation. Much enthusiasm was shown for the opportunity to discuss science in the unorthodox environment and cultural references quickly found their way into the scientific presentations. On the first day, the conference was visited by a journalist from a regional newspaper. The article, which was published on the front page in Arbetarbladet on the last day of the conference, was entitled “Quantum physicists at unique grand meeting in Mehedeby”. It was read out loud from the altar for the closing of the conference.

Quantum Confessions also received appreciation from the locals. The only restaurant in the village, run by a newly arrived Bangladeshi family, opened only in March 2022. The business brought about by the conference significantly contributed to its continuation and it singlehandedly raised its rating on Google Maps from 3/5 to 4.8/5. Similarly, the owners of the only sizable accommodation around, a mansion located within the scenic neighboring village of Älvkarleby, showed much enthusiasm for hosting the physicists and they were frequently seen taking photos of their guests. The receptionist commented that “this is a fun crowd and they create such a nice ambience”. A couple of days after the closing of the conference, Arne Ruth went to the nearest town to buy groceries. While parking his car, he was approached by an 89-year-old man, a life-long resident of Mehedeby, who wished to convey how happy and proud he was that such an international event both had and could take place in his home village.