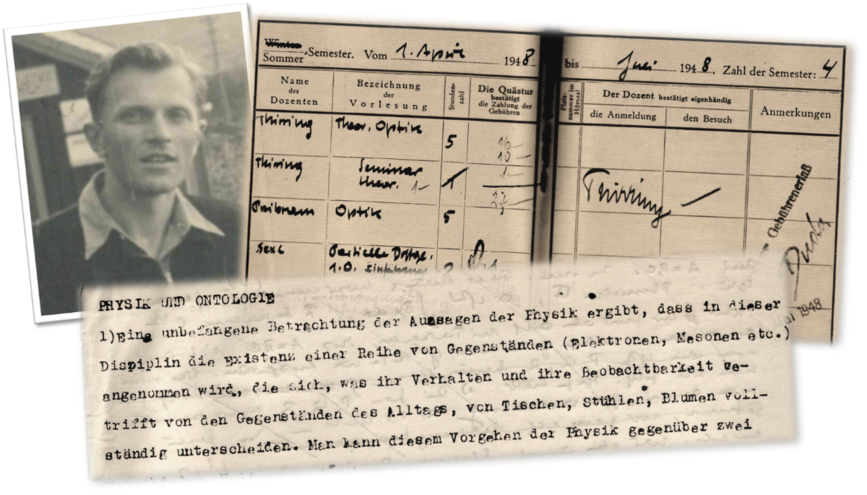 In his retrospective autobiographical remarks, contemplating the peculiarities of his academic studies in post-war Vienna, the thought-provoking and controversial Austrian philosopher Paul K. Feyerabend (1924-1994) described himself as a physicist turned philosopher for lack of talent. Such a narrative connected his intellectual trajectory with the biographies of leading members of the Vienna Circle, including the restive outsider, Karl Popper. By the early 1970s, however, most of these thinkers had fallen under Feyerabend’s irreverent critical spear as lunatics of a sort, affected by “a previously unknown form of insanity” in their allegedly self-referential and irrelevant ruminations about science [2]. More likely and importantly, that narrative would have echoed, in Feyerabend’s mind, the outstanding tradition of Viennese scientist-philosophers epitomized by the figures of Ludwig Boltzmann and Ernst Mach. These men were models and champions for Feyerabend as he began his own relentless criticism of the representatives of mainstream trends in the philosophy of science of those years: logical empiricism and critical rationalism.

Both before and after his war service (1942-1945), Feyerabend steeped himself in physics [7]. But it was as a young philosopher of quantum theory that he made a name for himself in the second half of the 1950s [5].

In the aftermath of WW2, after flirting briefly with the humanities, Feyerabend resumed his physics studies at the University of Vienna under Kasimir Graff, Adalbert Prey, Karl Przibram, Theodor Sexl and such charismatic characters as the late Hans Thirring and Felix Ehrenhaft. The latter had recently returned to Vienna from his forced American exile surrounded by an unsettling allure, due partly to his heterodox views and partly to his contentious demeanor. He would become a particularly significant figure for the Feyerabend of the late 1960s, who had reached the top tier of academic ranks but felt no longer at home in academic philosophy of science.

In the feverish intellectual atmosphere of occupied Vienna, the crutch-wielding veteran and fiercely curious mature student Feyerabend found himself in a sea of opportunities. On various occasions in Vienna and Alpbach, Feyerabend had the chance to meet and interact intensively and repeatedly with acclaimed physicists and distinguished philosophers of science of the likes of Erwin Schrödinger, Léon Rosenfeld, Maurice Pryce, Philipp Frank, and Karl Popper. In addition, as the leading member of a small group of STEM students at the University of Vienna — including Rudolf Goldberger de Buda, Peter Schiske, Heinrich K. Eichhorn, Hans Sagan, and Erich Jantsch — Feyerabend tried to revive the spirit of the Vienna Circle, this time under the patronage of Victor Kraft, a former senior but peripheral member of the Circle around Mortitz Schlick, and the successor of Boltzmann’s, Mach’s, and Schlick’s Chair at the University of Vienna. Most of the members of this study group, the “Kraft Circle” — also known today as “the Third Vienna Circle” [9] — would go on to have brilliant academic careers in astronomy, physics or mathematics in North America. Feyerabend steered a similar course, but along a different path.

Feyerabend’s shift from physics to philosophy seems to have been prompted by an intellectual failure combined with a wish to graduate early [4]. His work on a doctoral dissertation tackling a problem in classical electrodynamics turned out to be a dead end. This made him turn temporarily from physics to philosophy,  completing his PhD in 1951 under Kraft. Not long after submitting his dissertation, generous scholarships came his way that allowed him to meet none other than Niels Bohr and his research team in Denmark (1951) and to continue his post-doctoral studies at the London School of Economics under Popper’s supervision (1952-53). As Popper developed his meditations on quantum theory, Feyerabend concentrated on von Neumann’s proof and its crucial implications for alternative approaches to the so-called “Copenhagen Interpretation” of quantum theory.

Feyerabend’s work on the philosophy of quantum theory in the years following his return to Vienna (1953-55), together with his constantly expanding connections in international academia, boosted a skyrocketing career. With the support of Popper, Schrödinger and Pryce, Feyerabend was appointed lecturer in the philosophy of science at the University of Bristol (1955-58), where he exposed the conservative, “positivistic”, attitude of the Copenhagen Interpretation, focused on the quantum theory of measurement, and helped organize the Ninth Symposium of the Colston Research Society (1957). The event brought to Bristol the highest echelon of mid-1950s quantum physics theoreticians, including David Bohm, whose unorthodox attempts to relaunch de Boglie’s hidden-variable hypothesis were then hotly debated. Soon afterward, Bohm became Feyerabend’s colleague and discussion partner at Bristol.

In the early 1960s, Feyerabend’s promotion to full professor at Berkeley was strongly resisted, obstructed, and generally slowed down by Emilio Segré. A leading figure in the physics department with a deeply-felt interest in the history of science, and a member of a committee charged with revitalizing the philosophy department at Berkeley, the Nobel-prize winner took a stern stance against Feyerabend’s later work on the problems of microphysics. This work put forward a reevaluation of Bohr’s interpretation of quantum theory, understood in its own terms and in contrast to Popper’s critical reading, but one that still encouraged the construction of a novel, alternative, and “realistic”, quantum theory. Segré’s staunchly disapproving reception, which questioned the currency and relevance of Feyerabend’s work, deeply affected Feyerabend’s self-confidence. However, that blow was attenuated by a promising train of thought that Feyerabend had been developing at the turn of the 1960s. It foreshadowed something of a breakthrough within the framework of critical rationalism: combining Popper’s methodological proposal with the metaphysical assumptions behind Bohm’s hidden-variable theory so as to improve Popper’s falsificationism by emphasizing its pluralistic component. The result was Feyerabend’s theoretical pluralism: a methodology for science which insisted on theory proliferation as the best strategy to maximize testability, thereby promoting progress.

Feyerabend devoted the 1960s to developing this line of research, swimming more and more explicitly against the philosophical stream and coming to rest on the methodological anarchism of his most well-known work: Against Method - Outline of an Anarchistic Theory of Knowledge (1975) [3]. Quantum theory still had a role to play in the process. It was a seminar discussion with C. F. von Weizsäcker (1912-2007) in late 1965 that finally convinced Feyerabend of the pointlessness of an abstract approach to the philosophy of science and of the need for more concrete, detailed case studies of significant steps in the history of science. The lecture series on the philosophy of quantum theory he delivered at Stanford University as part of a summer institute for philosophy college teachers (1967), together with the publication of Popper’s reiterated criticism of Bohr’s views, triggered, partly as a frustrated reaction [1], Feyerabend’s thorough defense of Bohr’s interpretation of quantum theory on historical grounds.

Feyerabend’s concern for quantum theory soon dropped into the background as he committed himself to debunking the general philosophy of science. At the turn of the 1980s, when approached in Zurich by a young scholar who introduced himself as a physicist turned philosopher of science, Feyerabend could not help but comment, bluntly and somewhat self-ironically: “Was für ein Abstieg! [What a decline!]”

[10] van Strien, M. “Pluralism and Anarchism in Quantum Physics: Paul Feyerabend’s writings on quantum physics in relation to his general philosophy of science”, Studies in History and Philosophy of Science Part A, 80 (April 2020), 72-81.