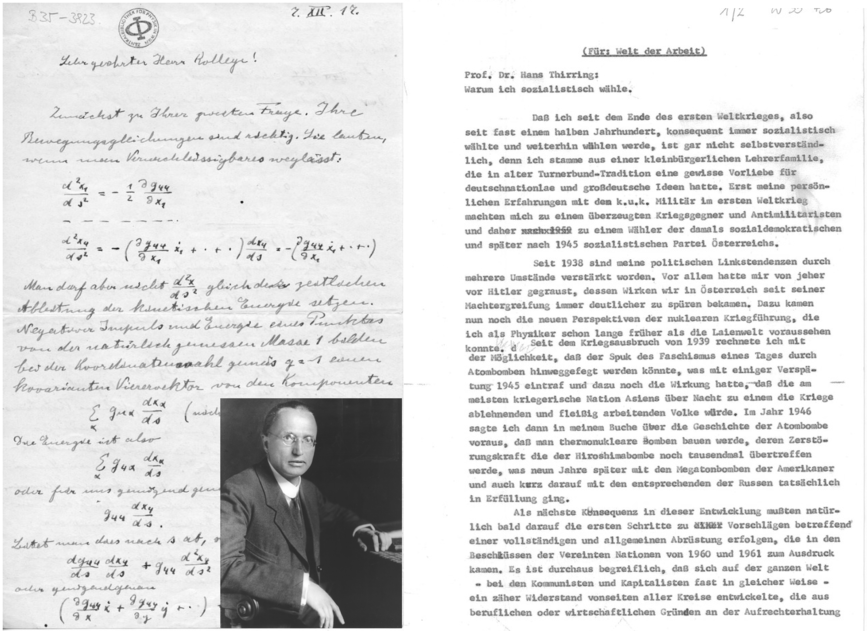 Left: A letter from Albert Einstein to Hans Thirring (the two were friends and shared not only scientific but also social-political views), dated December 7, 1917, as a reply concerning "Die Wirkung rotierender Massen" (“the effect of rotating masses”), which laid the groundwork for what has become known as the “Lense-Thirring effect” [3]. Centre: A photo portrait of Hans Thirring. Right: A draft of a political article by Hans Thirring, “Warum ich sozialistich wähle” (“Why I vote socialist”). Originals ©Österreichische Zentralbibliothek für Physik.

In 1956, my third semester of studying physics, I entered the course of theoretical physics by Hans Thirring, then head of the Institute of Theoretical Physics at the University of Vienna. His course and his teaching were famous, though there was no quantum mechanics included. In the following two years (i.e. four semesters) I attended Theoretical Optics, Theory of Heat (classical thermodynamics), Mechanics I and Mechanics II.

There used to be one Docent at the Institute who lectured on Quantum Mechanics, but he had emigrated to the US just before I started with theoretical physics. At that time, we were about a dozen students in theoretical physics and we knew, that somehow we had to learn quantum mechanics. We arranged with the assistants a weekly reservation of the lecture hall at a certain time and Julius Wess – then a young assistant of Hans Thirring – promised to help, whenever we did not understand some difficult parts. We decided to buy – each of us – the book by Dirac on quantum mechanics [1], not being aware that this was probably the most difficult book available.

Later on, I learned Quantum Electrodynamics from the book of Walter Thirring (the son of Hans) and Particle Physics from the Bethe-Schweber-deHoffmann book. There were no lectures on these topics!

Hans Thirring was a very inspiring personality and teacher. His interests exceeded by far physics and even science. He was a member of the “Bundesrat“ (the second chamber of the Austrian Parliament) for the Socialist Party of Austria”. Frequently, he jumped into a taxi right after his lecture to go to the Parliament. It had happened that he held an examination on theoretical physics in a taxi from the Institute to the Parliament.

Hans Thirring insisted that a theoretical physicist need not know any formula by heart – with three exceptions. Therefore, he suggested to his students to come to the examination with a hand-written collection of formulae. The three exceptions were: 1. Maxwell’s equations, 2. (if I remember correctly) the Lorentz transformation and 3. (to my great surprise) the three Eulerian angles which define a coordinate rotation!

In many ways Hans Thirring was an idol for me when I became professor of theoretical physics at his former Institute in 1968. So, following his example, I suggested to my students to bring any book of their choice to their written examination. However, that could not last long, for my colleagues asked me to stop that practise simply for reasons of conformity.

He also had an interesting idea in world politics. He suggested that Austria, only since 1955 a sovereign state, should declare to UN to be a “peaceful state“ with no military at all and UN should assure to defend Austria in case of a foreign aggression. He gave public talks on his idea (called the Thirring-plan), and he even presented it in the Parliament, but his friend Bruno Kreisky (at that time Foreign Minister) told him that this was not realistic with the advice: “Hans, you better stick to your physics and don’t mingle in foreign politics!”.

Without proof, I am of the opinion that these discussions between Hans Thirring and Bruno Kreisky were not without any effect; eventually they had an influence on  the foundation of the “UNO-City“ in Vienna! In 1979, the first part of the “Vienna International Center” was opened and Vienna became the third UN headquarter after New York and Geneva.

Hans Thirring was also interested in parapsychology, in particular telekinesis. Not all of his colleagues were amused that he even performed experiments in the Institute! Apparently, he had discussions about that with his friend Erwin Schrödinger, who at that time lived in Zürich, as testified by the correspondence between the two: “If one has the […] rare opportunity to personally perform experiments and he does them meticulously, he observes that perhaps some things are worth a closer inspection. […] The question of the possibility or impossibility of telekinetic phenomena cannot be decided purely theoretically, but has to be decided by experiment. […] After all, it is less consequential if a university professor falls prey to a swindler, than if anxiety of embarrassment prevents research of a possibly important natural phenomenon.” [2].

On return from his last trip to the US, on the ship crossing the Atlantic, Hans Thirring suffered a stroke and lost his ability to speak. Approaching the Institute, I saw him standing in the sun; when I reached him he said in a clear voice: “Ich kann leider nicht mehr sprechen!” (“Sorry, I cannot speak any more!”). With his strong will, he must have learned to clearly speak this one sentence!