By Karl Sigmund, Faculty for Mathematics, University of Vienna 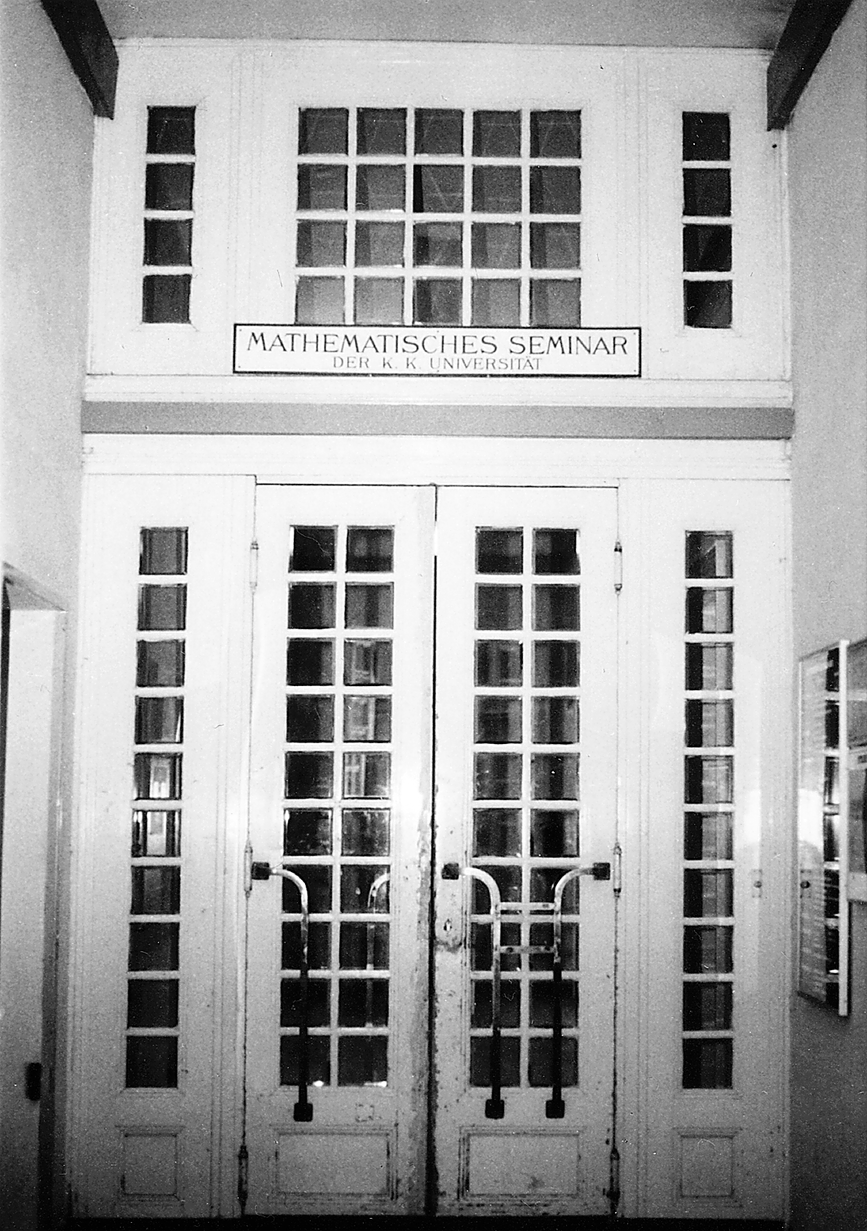 Entrance of the corridor where the Vienna Circle use to meet in Boltzmanngasse 5 (at that time part of the Faculty of Mathematics of the University of Vienna, today housing the Faculty of Physics) [source: Institute Vienna Circle, CC BY-SA 4.0 <https://creativecommons.org/licenses/by-sa/4.0>, via Wikimedia Commons]

The Vienna Circle was a group of philosophers, mathematicians and scientists meeting regularly, from 1924 to 1936, in a seminar room on the ground floor of Boltzmanngasse 5 (in the building that currently hosts the Faculty for Physics of the University of Vienna). Its members developed logical empiricism and had a huge influence on the philosophy of the 20th century, and in particular on the analytical philosophy prevailing in US and UK.

Now that the seminar room, which formerly belonged to the mathematics institute, houses a Magnon-Spintronics lab, it may be fitting to describe the physics connection of the Vienna Circle, which started well before its “official” lifetime, and ended long after.

The godfather of the Vienna Circle (if such a term may be applied to radical positivists) was Ernst Mach, who studied physics in Vienna and acquired a worldwide reputation for his work on shock waves. Most of this work was done during the three decades spent by Mach as a physics professor at the University of Prague. In addition to his experimental work, Mach gained celebrity for his critical analysis of the basic concepts of physics. This led to his appointment, in 1895, to a chair in philosophy at the University of Vienna [see the entry of our blog: https://www.iqoqi-vienna.at/blogs/blog/transgressing-the-disciplinary-boundaries-ernst-mach, ed.]. Tragically, three years later, Mach was paralyzed by a stroke and forced to retire. But his thinking was left unimpaired, and he remained engaged in lively discussions with the foremost physicists of his age. In particular, he confronted theoretical physicist Ludwig Boltzmann in a historical debate on the atomic hypothesis. Ironically, Mach’s lectures on philosophy, after his retirement, were entrusted to Boltzmann. Again, this lasted only for a few years: Boltzmann committed suicide in 1906. It looked as if a great Viennese project –  let physicists teach philosophy – was nipped in the bud. But in fact, the two men had inspired a generation of students. In particular, the physicist Philipp Frank, the mathematician Hans Hahn and the social reformer Otto Neurath took to regularly meeting in what today would be called a science café. This was the forerunner of the Vienna Circle.

The group dispersed before WWI. In particular, Frank succeeded Albert Einstein as a physics professor in Prague, on the latter’s recommendation. (Einstein, who was of about the same age, had already proved that Mach was wrong about atoms but right in questioning “absolute space”). After WWI, when Hahn and Neurath returned to Vienna, they decided to reassume their gatherings on the philosophy of science, this time together with a philosopher from the University of Vienna. They did not have to look far. Serendipitously, at that time, Berlin-born Moritz Schlick had been offered a vacant chair of philosophy of science in Vienna, as successor the one of Mach. Schlick immediately became the center of the group, which met each second Thursday evening in his “Privatissimum” (for invited only).

Schlick had studied physics with Planck and had been the first to explore the philosophical implications of Einstein’s ideas on relativity. Thus, Schlick, Hahn, Neurath, Frank (when he visited Vienna) and a brilliant group of students and postdocs met every second Thursday in Boltzmanngasse 5 for an evening of discussions. The group size varied between 12 and 20. At first, this “Schlick Circle” (one of many dozens of discussion groups in Vienna) followed Mach in an attempt to base science on an “analysis of sensations”. It soon, however, became spell-bound by Wittgenstein and engaged in an analysis of language – the “linguistic turn”. Schlick kept up a close exchange with Einstein, von Laue, Bohr, Pauli, Heisenberg and Schrödinger. (Interestingly, no physicist in Vienna was member of what around 1930 became internationally known as “Vienna Circle”. Some had close contacts, however, none more so than theoretician Hans Thirring. Together with Hans Hahn, he was particularly interested in parapsychology, which seems odd today but it wasn’t then.)

Around 1930, mathematical logic underwent developments as spectacular as those in physics. The Vienna Circle contributed greatly, through Rudolf Carnap and, in particular, Kurt Gödel, the youngest and quietest member of the Circle. This development led eventually, via Alan Turing and John von Neumann, to computer programs and our digitalized world. During the ‘thirties, however, political developments and personal tragedies put an end to the Vienna Circle. In particular, Schlick was murdered in 1936, in the University, by his former student. Most members went into exile due to the advent of Austrian fascism and National Socialism and never returned [see the entry of our blog: https://www.iqoqi-vienna.at/blogs/blog/finis-austriae-finis-scientiae-the-destruction-of-science-in-austria-in-1938, ed.].

It was in Princeton, during the ‘forties, that the Vienna Circle’s connection with physics found its culmination in the now legendary friendship of Albert Einstein with the much younger Kurt Gödel. In particular, when Gödel was asked to contribute to a Festschrift for Einstein, he discovered that the field equations of general relativity allow for “rotating universes,” and “time travel into the past,” challenging all received notions of causality and time. Theoretical physics still has to come to grips with this idea, but from the perspective of the history of science, it can be seen as a climax of the intellectual quest initiated by Ernst Mach.