by Caslav Brukner, IQOQI-Vienna and University of Vienna 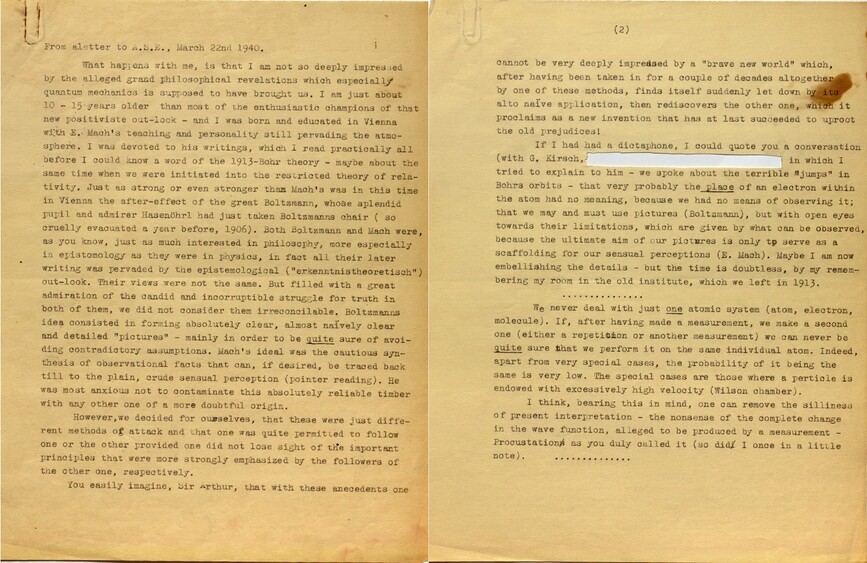 Scanning of an original transcription of a letter from E. Schrödinger to A. S. Eddington on March 22, 1940. (Source: Österreichische Zentralbibliothek für Physik, [1]).

Erwin Schrödinger's letter to Sir Arthur Stanley Eddington of March 22, 1940 [1], is above all a call for clear philosophical reflection on the scientific method. It stands in stark contrast to the “shut up and calculate” culture that is so prevalent in physics today. Two Viennese scientists –Ernst Mach and Ludwig Boltzmann– had significantly influenced Schrödinger’s intellectual formation and philosophical standpoint. Schrödinger adopted Mach’s epistemological view of science theories, according to which “sensations” are empirical building blocks of scientific knowledge [2]. At the same time, Schrödinger accepted Boltzmann’s methodological thesis that visualisation (German: Anschaulichkeit) is a necessary criterion for understanding. However, he held that this Anschaulichkeit should not be thought of as representing anything real. Rather, it is useful in purely pragmatic terms. In his letter, Schrödinger argues, using an example from atomic theory, why the two seemingly opposing positions of Mach and Boltzmann are not only compatible, but even necessary for the progress of science:

“… very probably the place of an electron within the atom had no meaning, because we had no means of observing it; that we may and must use pictures (Boltzmann), but with open eyes towards their limitation, which are given by what can be observed, because the ultimate aim of our pictures is only to serve us as a scaffolding for our sensual perceptions (E. Mach).”

What can we learn today from Schrödinger’s philosophical view? The two different philosophical commitments of Mach and Boltzmann are today reflected in the “anti-realist” (QBism, Neo-Copenhagen, etc.) view and “realist” (Bohmian mechanics, Many-worlds, etc.) view towards the concept of quantum states and the interpretation of quantum theory. This dichotomy is reminiscent of that between Heisenberg’s matrix mechanics and Schrödinger’s wave mechanics. These two formulations of quantum mechanics are inherently very different. In his analysis of Schrödinger's philosophical views, and the influence of Mach and Boltzmann on them, Henk de Regt [3] writes that Heisenberg’s formulation of mechanics is “mathematical”, “non-visualizable”, and “positivistic”, while the latter is “physical”, “visualizable”, and “realistic”. He goes on to state that Schrödinger, who himself proved the mathematical equivalence between the two formulations, recognized that those parts of wave mechanics which go beyond any empirical proof are epistemologically empty. Nevertheless, he insisted that good physical theories should provide space-time pictures. Today, when we consider the dichotomy between the “realistic” and the “anti-realistic” interpretations of quantum theory, we may follow Schrödinger’s path and not be afraid to use various visualizable images if they seem heuristically powerful, always keeping in mind, however, that no criterion for existence can be given except for the observable consequences of a theory.

A historical remark: An attentive reader will notice that in one copy of the letter (shown in the figure above, and pages 1-2 of [1]) a piece of text has been cut out. It refers to G. Kirsch, with whom Schrödinger had conversed. The truncated text passage is saved in the second, intact copy of the letter (pages 3-4 of [1]). It reads: “he is now a Nazi, I am sorry to say”. It is not known who cut the text passage, and when and how the second copy was saved intact. Was it an attempt to hide Kirsch’s problematic past? Gerhard Kirsch, in fact, had been the head of a nucleus of the National Socialist Teachers’ Association at the University of Vienna from 1933 to 1937 [4]. From 1941 on, Kirsch headed the re-established I. Physikalisches Institut [5]. After the end of World War II, he was summarily dismissed in 1945 and retired as an assistant in 1947 [6].

The rise of the Nazi regime in 1933, on the other hand, prompted Schrödinger to emigrate from Berlin to Oxford. In Berlin, he had succeeded Max Planck as professor of theoretical physics at Friedrich Wilhelm University.  In the same year he received the Nobel Prize in Physics. In 1936 he accepted an appointment at the University of Graz in Austria. After the Anschluss in 1938, however, he emigrated again, this time to Dublin, where he remained until 1956. He spent the last years of his life in Vienna until his death in 1961.

[2] Ernst Mach is said to have asked the proponents of the atomic hypothesis the question “Atoms? Have you ever seen one?” to refute their view that unobservable entities should be considered real.