By Brigitte Bischof, Lecturer at the Johannes Kepler University of Linz, free scholar and writing teacher 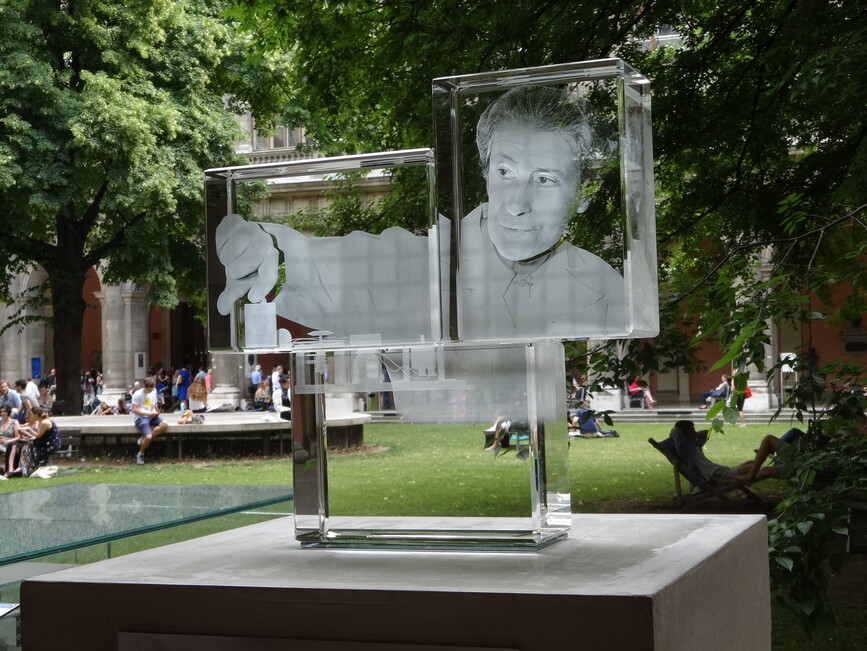 Monument for Berta Karlik in the arcades (Arkadenhof) of the main building of the University of Vienna (Realized by the artist Thomas Baumann). Source: private Archive Katharina Kniefacz, Vienna.

Berta Karlik’s legacy seems quite visible at the University of Vienna. There is a memorial monument in the arcades of the main building of the university (2016), as well as a gateway (“Tor der Erinnerung”) at the Campus (1998), a program to support excellent female scientist (2011) and a small street in Vienna’s 13th district Hietzing (2011) named after her. This visibility however does not seem to correlate with her being quite unknown to the public.

Nevertheless, looking at Berta Karlik’s biography, she can be classified as one of the most successful female physicists in Austria in the twentieth century, besides Lise Meitner (See the entry: www.iqoqi-vienna.at/blog/lise-meitner-a-female-pioneer-in-nuclear-research): Starting her career at the Vienna Institute for Radium Research in the early thirties, she stayed at this institute through all the subsequent historical and political upheavals, and finally became the first female full University Professor in Austria. In nuclear physics she was known for her work on scintillation counters in the 1930s and the discovery of the element 85 (Astatine) in nature in the early 1940s.

Karlik’s involvement into physics research in these years at the Viennese Radium Institute was not as unusual as one may think in retrospect (See the entry: www.iqoqi-vienna.at/blog/why-women-scientists-thrived-at-the-radium-institute-in-interwar-vienna). After her studies at the University of Vienna, she finished her training as school-teacher at a “Mädchenrealgymnasium” (highschool for girls), followed by one year abroad with the Crosby-Hall-Fellowship of the International Federation of University Women. Only after this inspirational year her destination was clear: to stay in science. Karlik found in her former supervisor, Stefan Meyer, not only a mentor but a real promoter within the Viennese institutions: he supported her from the appointment as “scientific help” at the Radiuminstitute in 1933 to the “Habilitation” in 1937, and he even arranged that she would become his successor as the director of the Institute after World War II.

In the Nazi Period, while a significant number of her colleagues – male and female- was forced to leave Austria (See the entry: www.iqoqi-vienna.at/blog/finis-austriae-finis-scientiae-the-destruction-of-science-in-austria-in-1938), her own career was in contrast hardly affected. On the other hand, denazification after 1945 may have paved the way for her subsequent career, culminating in her nomination as the first female full University Professor in the whole history of Austria in 1956. Finally, in 1973, one year before her retirement, she was elected to become the first full female member of the Austrian Academy of Sciences (ÖAW).

Karlik’s story can be told as an advancing list of successes and pioneering steps, but it was not as simple. Neither her academic career nor her election as a member of the Academy were free from discussions and/or needed several attempts before being successful.

Karlik was joined by several women in her activities at the Vienna Institute for Radium Research: she succeeded Elisabeth Karamichailowa as “scientific help”, she got the Haitinger Price of the ÖAW together with Elisabeth Rona and studied the decay of element 85 with Traude Cless-Bernert. Despite being active in promoting women in academia - she was significantly involved for instance in the reestablishment of the Austrian Union of Academic Women after World War II and from 1951 to 1954 president of this organization - Karlik unfortunately didn’t leave a female successor at the head of the Institute.

Berta Karlik in an interview: