Quantum physicists of IQOQI-Vienna and the University of Vienna present in the journal PNAS a new method to produce high-dimensionally entangled photon pairs. These systems can be the base for robust communication protocols that offer high throughput and are secure against eavesdropping. 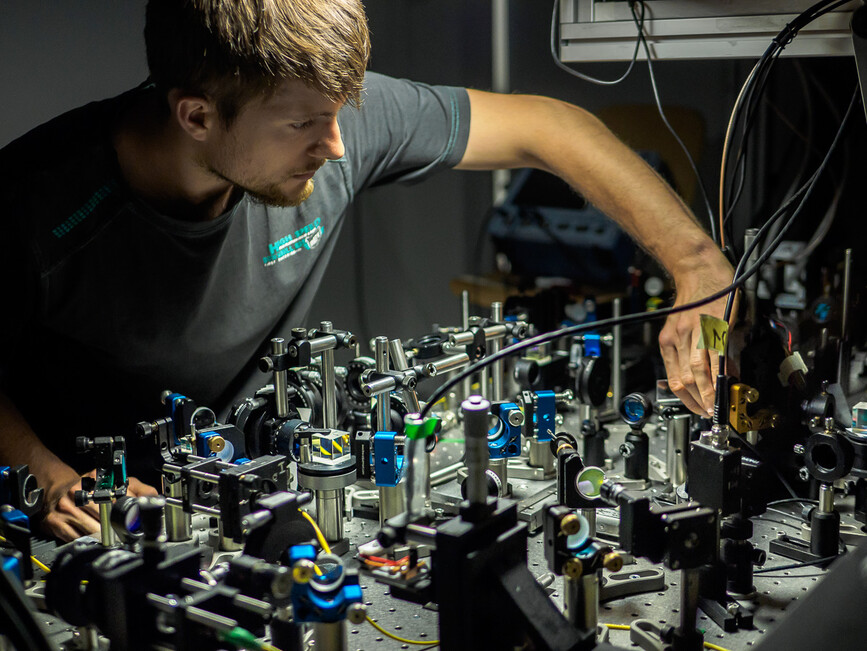 To build such secure quantum communication channels, scientists use systems of entangled particles. In the simplest case, such a system consists of a pair of entangled particles. The particles can be entangled for instance in their polarisation, among several other possibilities. In the case of polarisation, the two photons of an entangled pair can then be polarised either both horizontally (h) or vertically (v). Therefore, the pair can assume the two different states hh or vv and is thus entangled in two dimensions. Researchers can nowadays routinely create quantum systems with high-dimensional entanglement by using other physical quantities instead of polarisation.

Physicists at IQOQI-Vienna and the University of Vienna have now developed a completely new method through which photon pairs can be easily entangled in several dimensions. To achieve this, the researchers arrange multiple non-linear crystals in such a way that it is not possible to tell which of the crystals emits a photon pair when the system is excited with a laser. "We have experimentally realised the case with entanglement in three dimensions, in which an entangled pair is in a superposition of three different states 00, 11 or 22. Theoretically, with our approach the number of entanglement dimensions can be increased almost with no limit. The practical limit is probably between 10 and 20 dimensions," says Jaroslav Kysela, first author of a recent publication in the Proceedings of the National Academy of Sciences (PNAS).

The three-dimensionally entangled photon pairs are generated in the laboratory by sending a strong laser beam through a serial arrangement of three non-linear crystals. For this to work, the apparatus must be set up in such a way that it is impossible to find out which of the crystals emitted the photon pair. "In the actual experiment, this is much more complicated, because we have to arrange the possible paths of the photons such that they overlap so that we cannot tell which path they actually take. We use three laser beams for this and have to control the temperature of the individual crystals and the focus of the laser beams precisely. Then we adjust the phase and the orbital angular momentum of the photons with additional optical elements positioned between the crystals.” says Kysela.

A photon pair emitted by one of the crystals is not entangled. The entanglement is only caused by the fact that it is not possible to say which crystal produced the pair. If one adds several crystals - and thus more possible sources for a photon pair - this increases the number of entanglement dimensions.

The advantage of high-dimensional entangled systems is that they can transmit more information. For quantum communication, high-dimensionally entangled systems also mean more security. "Quantum communication is theoretically safe even with two-dimensional entanglement. But an unwanted eavesdropper can always hide in the noise of the signal. This would be less likely with our approach," says Kysela.