Einstein’s theory of gravity famously describes space-time as an elastic object, which bends and stretches in the presence of masses or energy, much like a garden trampoline. Yet, we never observe space-time directly, but only through its effect on particles. So how do we know that it has this elastic structure in the first place? 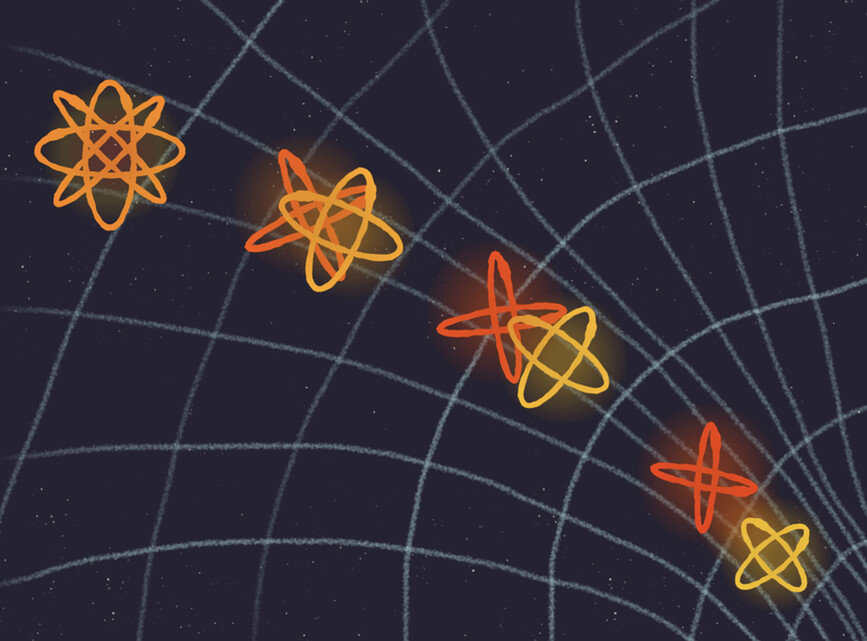 The key element to this question is the Einstein equivalence principle. If it holds for all particles and interactions, gravity then fits into the picture as an elastic space-time fabric with all that comes along for a ride, including gravitational waves and black holes.

Whether Einstein’s principle applies to quantum particles has been much debated. As a prerequisite for the debate is rigorous formulation of Einstein’s equivalence principle in quantum theory. In the latest issue of the journal Nature Physics, Magdalena Zych from the University of Queensland and Časlav Brukner from the University of Vienna and the Institute for Quantum Optics and Quantum Information (IQOQI-Vienna), formulated a quantum version of Einstein’s fundamental principle and proposed experiments to test it. We can now answer the question whether quantum particles in their most quirky motions also see gravity as an influence of a stretching space-time.

A quantum particle can be found in a so-called `superposition’ state of different masses (or different energies according to the mass-energy equivalence) – as if it was light and heavy `at once’. Previously, Einstein’s principle has been tested only for quantum particles in a state of a well-defined mass. But it turns out that we need to look at some very unexpected behaviour of particles in quantum superpositions of masses. Put in simpler words: much more can `go wrong’ with gravity in such scenarios, so we have to run more diagnostics to test the validity of Einstein’s principle. For example, we need to test if particles can make a transition between oscillating internally (like a clock), to being internally completely still (like a solid rock) and quantum states of the mass are necessary for analyzing this behaviour.

While there is no consensus how to even start describing quantum features of space-time itself (the notorious problem of quantum gravity), it is anticipated that Einstein’s principle will yield on the way. The recent work shows the need for completely new experiments, and thus opens doors for unexpected results and discovery of new physics.

The first quantum test of the principle along the lines suggested by the researchers has recently been accomplished in collaboration with Italian physicists from the University of Florence. Using their technique of Bragg atom interferometry, the Italian group realized a remarkably precise test that revealed no violation of the quantum version of Einstein’s principle to a few part per billion. The technology involved in such experiments can find applications in ultra-precise sensors for detecting earthquakes, volcanic eruptions, and in searching for underground deposits.