The concepts of quantum technology promise to achieve more powerful information processing than is possible with even the best possible classical computers. To actually build efficient quantum computers remains a significant challenge in practice. A new scheme termed "coherent photon conversion", could potentially overcome all of the currently unresolved problems for optical implementations of quantum computing. The international team of scientists led by researchers from the Vienna Center for Quantum Science and Technology (VCQ) at the University of Vienna (group of Anton Zeilinger) introduces this new scheme this week in Nature. 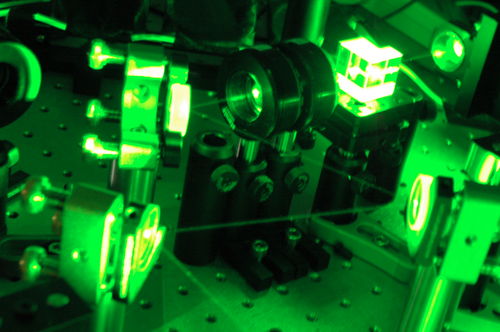 A new way for photons

Quantum technology derives its potential by exploiting uniquely quantum features such as superposition and entanglement. Single photons are excellent quantum information carriers, because they are naturally almost perfectly isolated from their environment. Also, quantum computers based on photons promise to be extremely fast. But current schemes for preparing, processing and measuring photons are inefficient. The new scheme provides a method of coherent conversion between different photon states and is based on enhancing the nonlinearity of a medium by a strong laser field. The method paves a road to solving all open challenges for optical quantum computation. For example, deterministically doubling single photons solves the preparation and measuring problems, and a novel type of photon-photon interaction gives efficient quantum gates. This new quantum optics toolbox opened up by "coherent photon conversion" promises to lead to a nonlinear optical quantum computer.

In a first series of experiments the group uses photons and highly non-linear glass fibers for a proof-of-principle demonstration of a process suitable for implementing the scheme. While deterministic operation has yet to be achieved, the authors' results suggest a line for development how this might be possible with sophisticated optical technologies, such as using highly nonlinear glasses and stronger lasers. Interestingly, the general idea of "coherent photon conversion" can also be applied to various other physical systems like atoms or nanomechanical devices.

This work was carried out as a joint effort by researchers of the Vienna Center for Quantum Science and Technology (VCQ) of the University of Vienna, the Institute for Quantum Optics and Quantum Information Vienna (IQOQI) of the Austrian Academy of Sciences, the National Institute of Informatics and the NTT Basic Research Laboratories (NTT Corporation) in Japan, as well as the Centre for Engineered Quantum Systems at the University of Queensland in Australia. It was supported by the European Research Council (Advanced Grant QIT4QAD), the Austrian Science Fund (grant F4007, an Erwin Schroedinger Fellowship, the Vienna Doctoral Program CoQuS FWF W121), the European Commission (QU-ESSENCE and QAP), the John Templeton Foundation and in part by the Japanese FIRST programme and the Ontario Ministry of Research and Innovation.