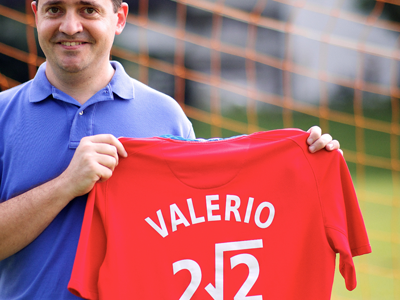 In good time for the season of brightly wrapped presents with surprise contents, Valerio Scarani takes us back to a familiar subject: randomness. He shines a new light on an old issue with the question: Random for whom?

Valerio Scarani is a fellow theoretical quantum physicist, Professor at the Centre for Quantum Technologies at the National University of Singapore, author of two popular science books and holder of a patent for quantum key distribution scheme. On things like the free will, the decline of the impact factor, and soccer in Italy and Singapore (among many other fascinating and only occasionally random issues) Valerio has much to say, which he does at his blog, spreadquantum.

Under his tree, Valerio might be pleased to unwrap a black and white leather ball. Don’t give him a t-shirt printed with “2√2“. He already has one.

As students of physics, we are taught very early on that quantum theory “allows only statistical predictions, not predictions of the individual events”. The teacher usually leaves the next question open, namely, whether this state of affairs is a temporary problem of an imperfect theory or a feature of nature. For a few decades, people working with Bell’s theorem have been trying to be a bit more assertive: if Bell’s inequalities are violated, the outcomes of measurements cannot consist of pre-recorded data. They could be explained by communication, but this unorthodox option opens more physical problems than it solves philosophical ones. Thus, we conclude, the outcomes are random – intrinsically random.

Most physicists are happy with intrinsic randomness (but then, most physicists were already happy when they were told not to ask the question, so majority should not be taken as a valid endorsement). Some are not. There are those who still manage to eliminate randomness: the Everettians by envisaging a multiverse of relationships, the Bohmians by invoking an explicitly nonlocal, non-observable quantum form of the ether. Even if one is not embracing those ideas, isn’t their very possibility sufficient to invalidate the claim that physics has demonstrated intrinsic randomness? There are also those who adopt a pragmatist view: all this talk on intrinsic randomness may be fine, but are classical random number generators, or even pseudorandom ones, not just as good for all practical purposes?

A necessary starting point is to agree on the meaning of “randomness”. Thanks to the efforts of many, we can say that, as of today, the most encompassing definition of randomness is “unpredictability”. It is not difficult to convince oneself that other characteristics and definitions follow from it. For instance, if the output of a process has low Kolmogorov complexity, the next outcome will be easy to predict; thus, a contrario, if the outcomes are hard to predict, the output string will usually have high Kolmogorov complexity.

Now, here comes the elementary point that many, including myself, often miss: unpredictability is always with respect to some knowledge. One cannot just say “it’s random”: one has to specify for whom it is random. Let us see how this simple question, random for whom?, clarifies the picture.

I don’t want my words to sound dismissive: in my opinion, daring ideas like multiverse of possibilities (radical) or the quantum potential (conservative) are witnesses to the meta-physical drive towards “reading the mind of God”, which I consider to be one of the greatest human endeavors. All I want to stress is that my Everettian and Bohmian friends, pilgrims in my same universe, won’t be able to predict the outcomes of a Bell test in any lab of this world (anyone wanting to contest this statement is kindly asked not to write a treatise in reply, but rather to undergo the Randi challenge: do come to the lab and show us your skills). As long as we ask for randomness with respect to knowledge available in our universe, we are all on the same side. Those who want to surprise God may well be up for disappointment.

The next step: assuming we want randomness against a being in this universe, should this being be endowed with unlimited or limited data-processing power? Assume for a moment that Laplace’s demon exists in our universe. Then, our current understanding is that “classical” phenomena would be predictable for it, while “quantum” phenomena would not. I believe this statement to capture some truth; certainly it captures why quantum theory is different from classical mechanics and is usually perceived as counter-intuitive. However, Laplace’s demon has never been found in this universe of ours, it is rather a Platonic archetype of computer processors. Some may even be tempted to consider “limited data-processing power” as one of the very defining traits of our universe.

Therefore, if we are looking for randomness against a being in our universe and with limited data-processing power, quantum and classical phenomena seem to have the same practical value. Many classical computer scientists go even further and think that “real randomness” may not be needed: pseudo-randomness does the job as long as the seed is insanely improbable to guess. For instance, I may use the first letters of each line of my favorite book as a secret code, for as long as nobody figures out which book that is.

Let me wrap this up. Is it wise to speak of “intrinsic randomness”? If we make it clear that the discourse stays within physics, I think we are safe. If we risk to be misunderstood as making meta-physical claims, I would advocate more restraint – although I know well that many magazines and popular books entice people to look into science precisely by avoiding such restraint and letting evocative extrapolations run their course (but does the end justify the means?). Or should we rather use “irreducible” randomness, which at least sounds a bit more technical from the outset?

At any rate, even “intrinsic” and “irreducible” fall short of reality. One could conceive irreducible randomness without violation of Bell’s inequalities. What we really have is randomness that is both intrinsic/irreducible and certifiable. With shameless plagiarism of more famous authorities, I’d finish saying that the day when we get a better hold on this, we may come closer to understanding the mind of God.