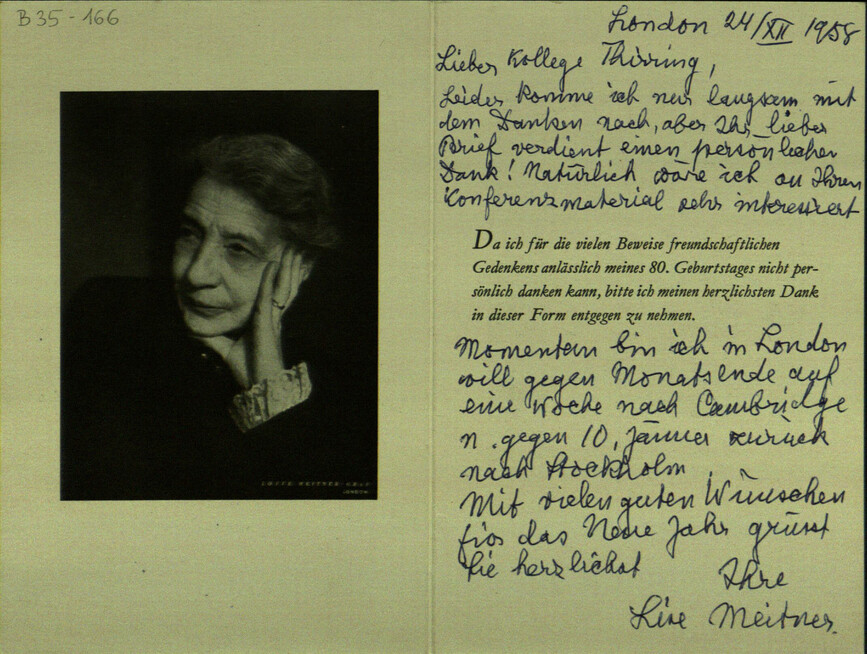 Postcard from Lise Meitner (portrayed on the left) to her Viennese colleague Hans Thirring, sent as a reply to the latter's wishes card for Meitner's 80th birthday (Source: Österreichische Zentralbibliothek für Physik).

Born in 1878 it was against all odds for Lise Meitner to become one of the leading scientists of the 20th century. In her Jewish Viennese family education was highly valued, but at the time, in Austria, girls were not permitted to attend high school, let alone universities as regular students. Yet, already at an early age, Meitner was determined to enter the world of science. ‘Since I was 13, I was obsessed with the desire to study physics’, she remembered much later in her life. She made her way to university as an external student, preparing for her graduation exams privately. At the age of 22, Meitner could finally take up her studies of physics at the University of Vienna - just in time for women to be admitted at the university after centuries of exclusion.

In 1905, she was among the first women to obtain a doctoral title in Vienna. The lectures of the chair of theoretical physics Ludwig Boltzmann were ‘a most stimulating experience’ for Meitner. Less fond were her memories of the mathematics courses: due to their early hour, she sometimes was so tired that she ‘was really afraid I would slip off my chair’. To carry her scientific education a stage further, after her graduation Meitner worked in the physics institute, where she learnt about a promising new research field: radioactivity.

But soon she could not see an academic future for herself in her beloved Vienna and thus left for Berlin in the autumn of 1907. Within months, Meitner was part of a lively group of aspiring and established physicists and chemists, among whom were her long-term research partner Otto Hahn, Max Planck, Max von Laue, James Franck, and Albert Einstein.

In the German capital, Meitner was quickly accepted in the scientific community, but only as an unpaid guest researcher. At the University of Berlin, she was permitted to work in the laboratory of Otto Hahn, but banned from all other rooms to not ‘disturb’ the male students. She could not even visit the bathroom, but had to run down several blocks to find a restaurant equipped with a lady’s toilet. Meitner’s first paid academic position was offered to her by Planck: he appointed her as his assistant in 1912, making her the first woman in Prussia to achieve such a position.

The collaboration between Hahn, the chemist, and Meitner, the physicist, proved most fruitful for the newly evolving research field of radioactivity. An early major scientific accomplishment of the duo was achieved in 1918, when they discovered a new chemical element: protactinium. In the same year, Meitner was appointed the head of her own physics section in the Kaiser Wilhelm Institute for Chemistry, finally achieving an academic position that was appropriate for her rank.

It was not before 1920, that women were finally granted the right of habilitation in Prussia. Meitner habilitated in 1922 as the first woman in physics in Prussia, which finally established her as a leading scientific figure of her time. Beginning in the mid 1920s she was regularly nominated for the Nobel Prize in Chemistry together with Otto Hahn, but their most important discovery was yet to come.

In 1934, Meitner convinced Hahn to start another joint research project: the reproduction of an experiment of Enrico Fermi, who had claimed to have produced heavy chemical elements by bombarding uranium atoms with neutrons. The chemist Fritz Straßmann was recruited for the project, but the endeavour turned out to be more complicated than initially expected. Moreover, Meitner got more and more under pressure through the rise of the Nazis in Germany: in 1933 she was dismissed from her adjunct professorship. In 1939 it became clear that a legal departure was no longer possible for her, literally at the last minute she was able to illegally cross the Dutch-German border in July.

Meitner and Hahn continued an extensive letter exchange over the progress of their project while she tried to start anew in her Swedish exile. During the Christmas days of 1939 it became clear to the team Meitner, Hahn, Straßmann and Meitner’s nephew Otto Robert Frisch, that the bombardment of uranium atoms with neutrons did not result in heavier atoms but instead caused the uranium nuclei to split. Hahn and Straßmann provided the experimental data, Meitner and Frisch accounted for the theoretical explanation of the process that Frisch coined ‘nuclear fission’. Meitner’s research idea had resulted in a revolutionary outcome–with unforeseeable consequences for the world.

Among Meitner’s many scientific accomplishments, the discovery of nuclear fission stands out. Yet when in 1945 this groundbreaking work was finally rewarded with the Nobel Prize in Chemistry, her name was not even mentioned. Otto Hahn was awarded the prestigious prize alone: a misogynistic Nobel committee, rivalry within Swedish scientists and their inability to acknowledge an interdisciplinary achievement cost her the clearly deserved honor. The nominations still kept coming, but Meitner was well aware of the opposition against her. During her lifetime, she was recommended at least 48 times for the Nobel Prize in Physics or Chemistry. She never received it.

Despite the difficulties Meitner had experienced throughout her life, in her mid 80ies, she confidently looked back on her accomplishments: ‘I believe all young people think about how they would like their lives to develop; when I did so I always arrived at the conclusion that life need not be easy provided only it was not empty. And this wish I have been granted. That life has not always been easy–the first and second world wars and their consequences saw to that–while for the fact that it has indeed been full, I have to thank the wonderful development of physics during my lifetime and the great and lovable personalities with whom my work in physics brought me in contact.’ (Meitner 2015 [1964], p. 2).