Researchers of IQOQI-Vienna and the University of Vienna propose a "coherence equality" to certify quantum superpositions without an interferometer. 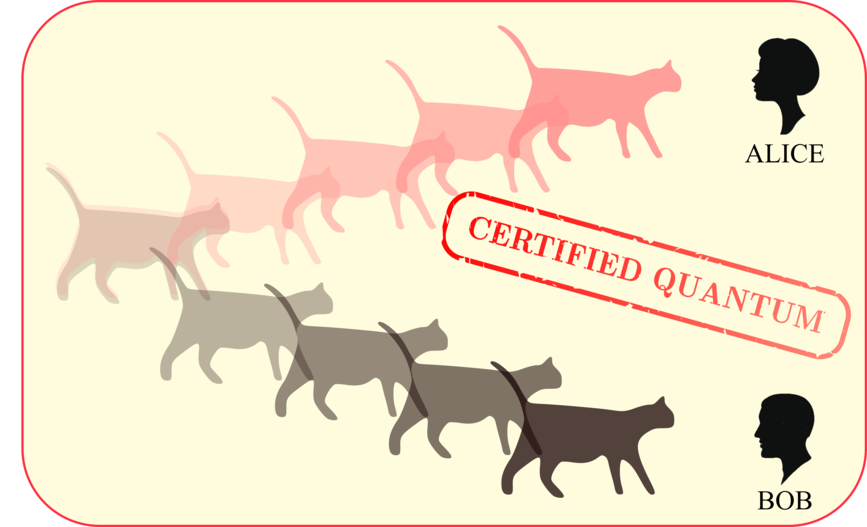 Suggestive representation of a superposition state of a single quantum object (here depicted as a cat to be reminiscent of the notorious Schrödinger's cat gedankenexperiment) delocalized at two different locations where two experimenters, Alice and Bob, are situated. The newly proposed method allows certifying a quantum superposition "at a distance", namely, by Alice's and Bob's local measurements only, without the need of bringing back together the quantum object at a single location. Image by Flavio Del Santo; IQOQI-Vienna

The effect of quantum superposition (a.k.a. coherence) is the most prominent feature to discriminate between the classical and the quantum domains. In the notorious Schrödinger’s cat paradox, a cat in a closed box is supposedly in a state of superposition between the states of death and life. However, observing such a condition directly is impossible, for when the box is opened and the cat observed the superposition suddenly disappears and the cat is always found in a well-defined state. The same happens in every (quantum) experiment.

To overcome this issue, physicists rely on the wave-like nature of quantum systems by using interferometers: they split (the wave function of) a quantum system into two separate paths, introduce a phase difference between the two paths and eventually recombine the system, thus closing a loop. Upon measurements, if an interference pattern appears –the same that arise when overlapping two waves, say when one tosses two stones in a lake– then we are sure that the state was in superposition. This certifies that we are dealing with a quantum system.

In their new theoretical study, Flavio Del Santo and Borivoje Dakić from IQOQI-Vienna (Austrian Academy of Sciences) and the University of Vienna developed a new tool that allows to tell apart classical and quantum resources (namely, the presence of superposition) without closing the loop of a standard interferometer. Here, they also split the wave function of a quantum system in two separate paths, but they can measure them at separate locations without having to bring the system back together, unlike in a standard interferometry experiment. From the measured quantities, they calculate an expression named “coherence equality”, that is exactly 0 only if the system is classical. Any deviations thereof certify the presence of quantum superposition, thus characterizing the “non-classicality” of a system. "Normally, we do not expect to see the interference fringes by using 'half of the interferometer' only - says Borivoje Dakić. - This is exactly what is happening here: we can witness interference 'at a distance'. I believe this can be turned into a resource for quantum communication."

The authors phrased their analysis in terms of a “communication game” played by two parties, Alice and Bob. A source produces a single information carrier (a particle, a bullet, a tennis ball, etc.) which is sent to Alice or Bob. A referee stands in each path between the source and the players and can decide whether to block the carrier on its path. This represents the encoding of a binary piece of information, that is whether the carrier goes through or not. The referees then challenge the players to answer a question that requires the knowledge of both the encoded pieces of information. The authors showed that, no matter what strategy the players choose, if the information carrier is a classical object the probability of winning this game - by answering the questions correctly - is always equal to 50%. On the other hand, if the information carrier is allowed to be in a quantum superposition of the two communication channels, the probability deviates from the 50%, hence witnessing a violation of the coherence equality.

"The novelty of this approach, - says Flavio Del Santo - as compared to similar works that aim to detect quantum superposition without closing the loop of an interferometer, is that this result does not rely directly on quantum theory." In fact, their approach is conceived in the same spirit of Bell’s inequality, which states that any theory (possibly beyond quantum mechanics) that violate its bound cannot uphold the classical feature of locality. In a similar fashion, any theory (again, possibly beyond quantum mechanics) that violates the coherence equality shows the non-classical behaviour of coherence.

Faculty of Physics, University of Vienna