Researchers at IQOQI-Vienna explore in a new study the concept of measurement in quantum mechanics from a thermodynamic perspective. In their paper, just published on the open-access journal Quantum, they show that good measurements require large amounts of expended work. 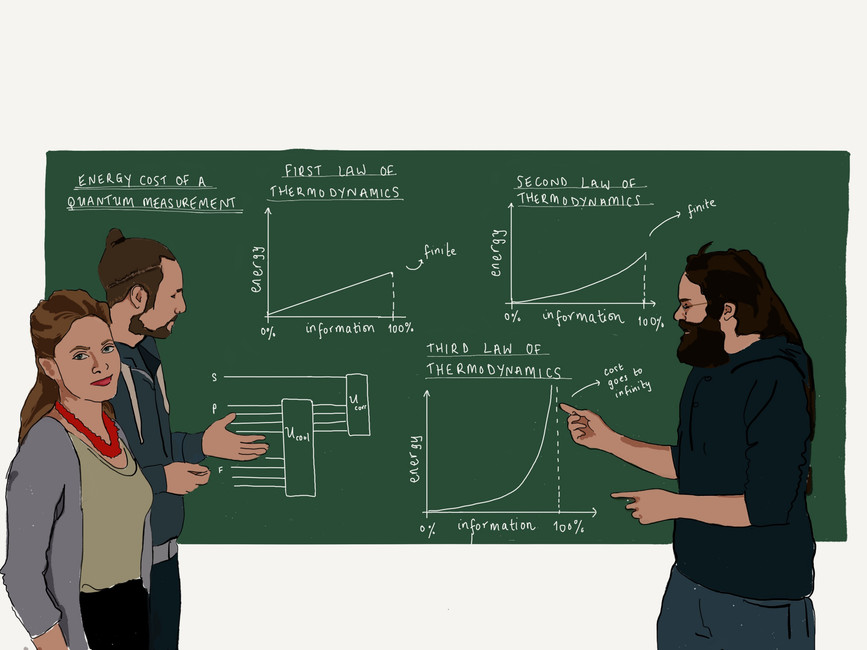 The notion of measurement forms an integral (and often heatedly debated) part of quantum mechanical reasoning. In quantum mechanics, a measurement provides information about the measured system, but also disturbs the latter. The so-called projection postulate is one of the central pillars (axioms, postulates and laws) at the foundations of quantum physics. According to this, an ideal measurement makes the system collapse in a pure state that is perfectly correlated with the measurement outcome. In other words, an ideal measurement allows one to make precise statements about the system after its interaction with the measuring device.

On the other hand, the central pillars of thermodynamics are formed by its three fundamental laws. Of particular interest is the third law of thermodynamics in the quantum regime, which tells us that no quantum system can be cooled to the ground state (which, in non-degenerate cases, is a pure state) in a finite time and with finite resources. This is in apparent contradiction with the projection postulate — how does an ideal, error-free, measurement leave the system in a state forbidden by the laws of thermodynamics?

In this work, Yelena Guryanova, Nicolai Friis and Marcus Huber, project and group leaders at IQOQI-Vienna, study the process of measurement as an interaction of a system with a measuring device, to elucidate the thermodynamic nature of the process. While previous considerations of the first and second law only implied a modest cost in energy and compensation of entropy, the researchers show that the third law of thermodynamics imposes the most drastic of restrictions. Indeed, ideal measurements are as impossible as cooling a system to the ground state. Impossible because they would require infinite amounts of time or energy, or exact control over infinitely complex measuring devices. Consequently, all practical measurements are non-ideal, and to approximate good measurements large amounts of work need to be expended.

These insights underline the relevance of incorporating the work cost of measurement imperfection to estimate the efficiency of quantum information-based engines and quantum computers.