Markus Müller, group leader at IQOQI-Vienna, is awarded the Best Paper Award of the Anniversary Fund of the City of Vienna for the Austrian Academy of Sciences 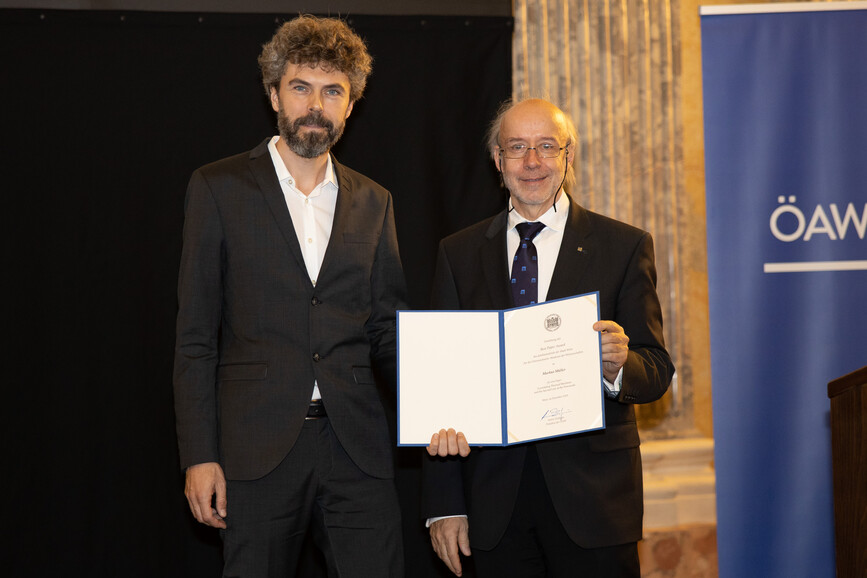 The Best Paper Award of the Anniversary Fund of the City of Vienna for the Austrian Academy of Sciences (ÖAW) is awarded to researchers of mathematic and scientific research institutions of the ÖAW, for the best scientific work published or accepted in a peer-reviewed journal within the year previous to the deadline. This year, Markus Müller has been awarded for his paper "Correlating Thermal Machines and the Second Law at the Nanoscale", published in PHYSICAL REVIEW X 8, 041051 (2018).

The second law of thermodynamics is an essential foundation of modern physics. It states that the entropy of closed physical systems must steadily increase - or, more generally, that the so-called "free energy" decreases over time. However, in the microscopic world of quantum mechanics, which forms the basis of much of modern technology, the second law is not the final word. In order to understand the possibilities and limitations of microscopic thermal engines working with single quantum particles, the second law must be supplemented by a family of many second laws [1]. Only in the limit of many particles the original second law is sufficient.

In the award-winning work, however, Markus Müller arrives at a surprising conclusion: the original second law is sufficient also for thermal engines working with individual quantum particles - if the machine acts on each particle only once, but is allowed to build up correlations with the particles. While textbook thermodynamics claims that entropy and free energy only apply to large numbers of particles on average, this study shows that they also determine what is possible if machines act on single particles, quantifying the exact amount of work to be spent or extracted.

The fact that the second law of thermodynamics remains valid also in the microscopic range of quantum mechanics is a fundamental insight into the interaction of these two physical theories.

Markus Müller completed his physics studies at the Technische Universität Berlin (TU Berlin) in 2004 and received his doctorate at the same institution in September 2007. Between 2004 and 2010 Markus Müller was a research associate at TU Berlin, subsequently (2010-2013) he held a postdoctoral position at the Perimeter Institute for Theoretical Physics in Waterloo, Canada. In the years 2013-2015 he was a Junior Group Leader at the Institute for Theoretical Physics at the University of Heidelberg; from 2015-2017 Assistant Professor at the University of Western Ontario, London, Canada (Departments of Applied Mathematics and Philosophy), and Associate Faculty Member at the Perimeter Institute. Since July 2017 Markus Müller is Junior Research Group Leader at IQOQI-Vienna and Visiting Fellow at the Perimeter Institute.