We are used to the fact that events are sharply localised in time. In a cuckoo clock, the cuckoo always calls at a precise time. Everybody looking at the clock would agree on this. However, a team of physicists led by Caslav Brukner from the University of Vienna and the Austrian Academy of Sciences showed that, when quantum mechanics and Einstein’s general relativity are combined, this might no longer be the case. When time “goes quantum” the temporal localisability of events becomes relative. In quantum times, the cuckoo can call at a precise time according to one observer, but some other observers might be totally uncertain about the time when it sings. 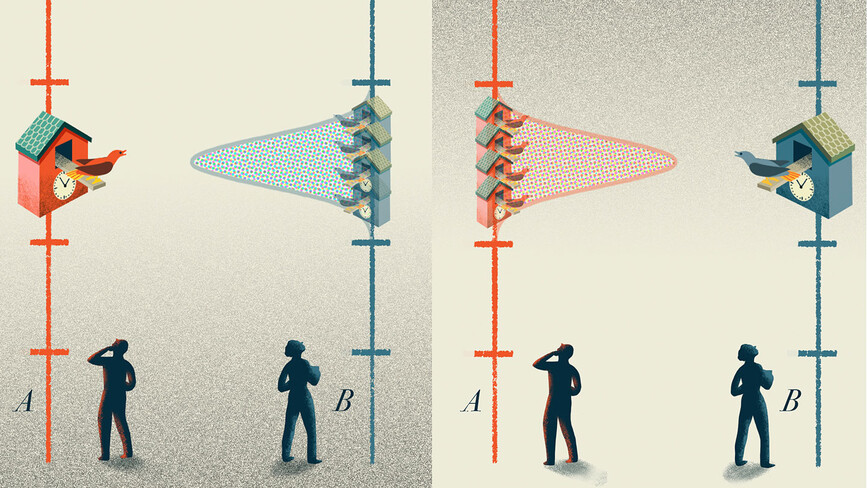 Relative localisability of events for two observers. Alice, who uses the red cuckoo clock to measure time, sees that the cuckoo calls at an exact time. For Bob, who uses the blue cuckoo clock, the call of the red clock is “smeared in time”. The situation is opposite with respect to the cuckoo calls of the blue clock. Now Bob sees the call at an exact time, while for Alice the event is not well localised in time. Such situations arise necessarily when the clocks interact gravitationally. By Juan Palomino; © IQOQI Vienna

The physical world is immensely vast: it ranges from stars and galaxies in outer space to atoms and photons in the laboratory. Despite the great variety of physical systems, all of them have something in common: they are located in space and evolve in time. Space and time, or space-time, is made out of events. Anything that happens to a physical system is an event. For example, the call of a cuckoo in a cuckoo clock is an event. Events are localised in time according to all observers. Imagine that Alice, an observer who uses the cuckoo clock to measure time, sees that the cuckoo calls at 2 o’ clock. Bob, another observer, who has his own clock and is standing far from the cuckoo, might see the call at a different time, let’s say 1:58. However, even if the cuckoo can call at different times according to the clock of Alice and the clock of Bob, both will se this event happening at a precise instant of time according to their clocks.

According to Einstein’s general theory of relativity, Bob’s clock can run slower than Alice’s if it is put next to a massive object, like a planet. How much slower Bob’s clock runs depends on the distance between the planet and his clock. Now consider this idea in the quantum regime. According to quantum mechanics, particles obey Heisenberg’s uncertainty principle, which means that one cannot simultaneously determine the position and velocity of a particle. What would happen if Bob’s clock is put next to a massive quantum particle, whose position is uncertain? How would then Bob’s clock keep track of the event, the call of the cuckoo, activated by Alice’s clock?

In a recent work, a team of physicists led by Professor Časlav Brukner from IQOQI-Vienna and the University of Vienna explored the temporal localisability of events when quantum systems influence space-time according to Einstein’s general relativity. They imagined different events “triggered” by the ticking of quantum clocks, much like the cuckoo call is triggered by Alice’s clock showing 2 o’ clock. They showed that, when quantum mechanics plays an important role, a new surprising effect happens. Clocks not only differ on what time the event happens, but they differ on whether the event happens at a precise time at all. Even if the cuckoo calls sharply at 2 o’ clock according to Alice, the Heisenberg uncertainty principle means that the time at which it calls according to Bob might be completely uncertain.

Importantly, for each event there exists always a clock according to which that event occurs at a sharp, precise time. In the case of the cuckoo call, this clock is Alice’s. This is useful because, using this clock as a reference, we can think of events as localised in time, just like we are used to in ordinary physics. “This trick translates a problem which we wouldn’t know how to solve —namely, the passage of time in the vicinity of gravitating quantum objects— into a problem which we are familiar with. How generally this trick can be applied remains to be seen”, said Esteban Castro Ruiz, one of the authors of the study.