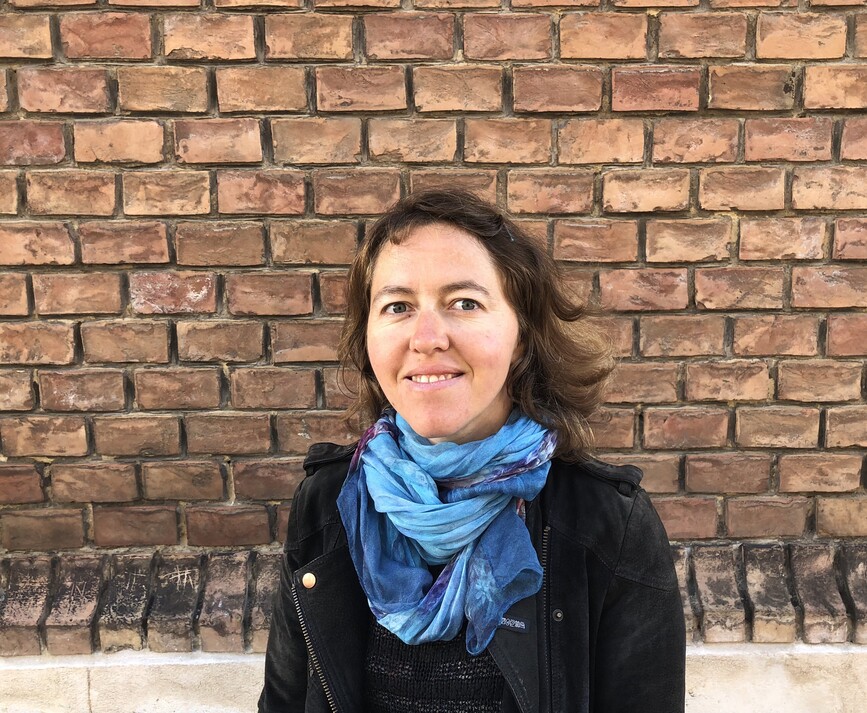 Tanja Traxler, well-established science journalist with a background in physics, addresses the hot topic of female underrepresentation in physics in a fresh way, including a glimpse on its reasons and consequences and historical examples on how gender bias permeates all genders.
Tanja studied physics and philosophy at the University of Vienna and the University of California/Santa Cruz. In her interdisciplinary PhD-project she investigates conceptions of space and vacuum in physics with a philosophical perspective. She has been a science editor at the Austrian daily broadsheet Der Standard since 2015 and was bestowed the Austrian sponsorship award for science journalism in 2018. Working with David Rennert, she co-authored the book "Lise Meitner – Pionierin des Atomzeitalters", which was named 2019 scientific book of the year (natural sciences category). Her most recent publication is "Die Chemie stimmt!", co-authored with the chemist Nuno Maulide.

Why we lack female physicists – and what to do about it

While for millennia, women have been excluded from academic endeavors, in recent decades female underrepresentation especially in science, technology, engineering, and mathematics (commonly abbreviated as STEM) has become a broadly discussed matter. Worldwide, numerous campaigns have been established to attract more female students for STEM, funding agencies have developed schemes dedicated to female researchers and mentoring programs have been developed in uncountable institutions. Undoubtedly, success has been made but nonetheless STEM are still mainly dominated by male career paths. In this contribution I aim at highlighting some of the reasons resulting in female underrepresentation in STEM with a particular focus on physics. Consequently, I will discuss the implications of this marginalization for science itself and society as a whole – and possible learnings.

One instance, vicarious for many

Consider this: Professor A and professor B work in the same research institution. Professor A receives an inquiry by a college about accepting a student in the institution of A and B. Professor A does not want to accept the student but also does not know how to refuse the inquiry. Therefore, A (who is currently abroad) writes a letter to B to ask for advice. Quite openly, A admits that the lone reason for rejecting the student is that the student is female. A is in fact rather annoyed and writes to B: ‘What shall I do with this? I do have all sorts of concerns about female students.‘

Not very surprisingly, such an instance really happened, the records can be found in the archives until today. Not very surprisingly either, the respective letter was written decades before the lack of female physicists was publicly lamented, it dates from April 6th, 1930. Not very surprising but shocking still is that this quotation is taken from two very well-known physicists. One was awarded the Nobel prize, the other was nominated for it numerous times. Most surprisingly maybe, professor A was a woman namely Lise Meitner, confessing her despair about a female applicant to Otto Hahn.[1]

The case of Lise Meitner, today rightly celebrated as a female pioneer in physics, can be read as an important reminder that the presence of female scientists does not guarantee for a gender fair scientific environment. As the cases of Meitner and other female scientists show, also women are not immune against reproducing ongoing stereotypes just like men are not necessarily bound to hold them up. As history wants, as far as Lise Meitner is concerned, in later years she developed a critical perspective on the underrepresentation of women in science, e.g. in a radio speech in 1953 she admitted: ‘Only later I realized how thankful especially women who are working in academic jobs should be to those women who have fought for equality.’[2]

The slow increase of female scientists

In Austria, the universities of Vienna, Graz, and Innsbruck allowed female students in the philosophical faculty from 1897 on. When Lise Meitner began her studies in physics in 1901, she was one of the very first female students in this subject. After her graduation, it was out of the question that as a female scientist she could occupy a paid position in academia. Thus, to pursue her academic career for years was only possible through financial support by her father. Meitner received her first university related income when Max Planck appointed her as his teaching assistant in 1912.

The absence of most male colleges during the first world war, turned out as a unique opportunity for female scientists in several European countries.[3] Also for Lise Meitner the year 1918 brought a promotion at the Kaiser-Wilhelm-Institut für Chemie in Berlin-Dahlem and ultimately established the ground for her scientific career.

Undoubtedly, times have changed. Open discrimination for gender reasons has diminished, for some positions and funding programs women are especially addressed. However, the underrepresentation of women in STEM is still far from being removed. But how far is far? In 2018, researchers investigated the gender gap in STEMM (= STEM + Medicine) by analyzing the gender of more than 36 million authors from more than 100 countries from more than ten million STEMM publications in more than 6000 scientific journals. Their disturbing conclusion: ‘Many research specialties (e.g., surgery, computer science, physics, and maths) will not reach gender parity this century, given present-day rates of increase in the number of women authors.’ As the authors highlight: ‘Our results support a need for further reforms to close the gender gap.’[4]

Reasons for male dominance in science

As for many broad ranging problems, also for the underrepresentation of women in STEM, there is no single answer but a multitude of relevant factors. In most countries, direct forms of discrimination in respect to gender have diminished. However, the Me Too movement in 2017 and other instances prominently revealed that also the community of STEM is not free from sexual harassment and assault of women. But there are far more forms of discrimination, many much more subtle. Widely discussed reasons of female absence in STEM concern cultural stereotypes and role models that account for young women to be rather drawn to careers in the social domain than in STEM fields. Concerning the loss of women at each rung of the academic ladder, the lacking capability between family life and academic careers have been brought forward as well as lacking childcare facilities in many countries, including Austria.

In 2005, the then acting president of Harvard University Lawrence Summers sparked controversy by elaborating his thoughts why women were underrepresented in tenured positions in science and engineering at top universities and research institutions. According to Summers, a different variability in aptitude at the high end between men and women is at stake to account for female underrepresentation in scientific top jobs.[5] Indeed, some studies suggest that there are little to no differences between scores in mental tests between the sexes, but that scores of males have larger variances than those of females.[6] To put it bluntly: While the mental abilities of women and men are on average the same, there are both more male simpletons as well as more male geniuses. However, other authors claim that those variances are much too small to explain the giant underrepresentation of women in STEM.[7] Thus, as biological and mental research provides not a well-enough reason to explain for the underrepresentation of women in science, again cultural stereotypes come to the foreground.

The stereotype to associate the concept of genius rather with men than with women is rooted so deeply in our culture that also women are inclined to believe fundamental findings in physics to have been achieved by men. A telling anecdote in that respect relates to the physicist Donna Strickland. Strickland did her PhD in the 1980ies under the supervision of Gérard Mourou. The objective of her thesis was to develop an experimental setup that could raise the peak power of laser pulses. Thereby, she came across the work authored by Goeppert-Mayer. In the first draft of her thesis, Strickland referred to Goeppert-Mayer as ‘he’ before a college stroke out this pronoun, commenting ‘Donna, shame on you!’.[8] In 2018, Strickland was awarded the Nobel Prize in Physics together with Mourou for the invention of chirped pulse amplification. As such, Strickland became only the third women ever to be awarded the Nobel Prize in Physics after Marie Curie (1903) and Maria Goeppert-Mayer (1963). The above-mentioned Lise Meitner was nominated at least 48 times but Otto Hahn alone received the award for their joint work.[9]

Mourou is one of the numerous men who actively supported women in pursuing academic careers. Indeed, throughout the history of science, many men fought for gender equality and it was also thanks to them that progress could be achieved along the way. Partly, male advocates for female researchers encountered just the same resistance as women did. Prominent in this respect is the attempt of David Hilbert to support Emmy Noether to be appointed as an assistant professor. Helplessly, at the end of the meeting with the committee that turned down the application, Hilbert yelped: ‘I do not see that the sex of the candidate is an argument against her admission as privatdozent. After all, we are a university, not a bath house.’

Science, from the outset, was understood as a practice to cultivate the best ideas, to challenge these with experiments and to consequently develop coherent theories backed up by data. Unfortunately, as the discussion above shows, science as it is practiced until today is to some extent a championship not of the best ideas alone but of best situated individuals. Undoubtedly, a scientific environment that promotes individuals rather according to sex, race or origin, than according to talent alone, can never be as excellent as science could be.

Moreover, the underrepresentation of women in STEM has broad implications for society as a whole, ranging from gender biases in clinical tests of medication and resulting deficits in medicine for women, to artificial intelligence reproducing gender stereotypes as the respective algorithms have been programmed mostly by men. The gender data gap can be life-threatening at times: consider crashing in a car whose safety measures just do not account for women’s measurements or an undiagnosed heart attack as symptoms are deemed ‘atypical’.[10]

So what to do about all of this? The reasons behind female underrepresentation in STEM are complex and manifold, thus the attempts to support female careers have to be all the more plentiful. Undoubtedly, action is needed to promote women in STEM but just as important is the integration of LGBT people and individuals from other underrepresented groups concerning origin, religion, or other factors. Universities and research institutions can act on many levels, including e.g. mentoring, scholarships, funding schemes, childcare, establishing role-models, and creating an inclusive, diversity-embracing atmosphere free from discrimination and harassment. In many places, those measures are already being undertaken, partly with a lot of effort and empathy, but the sad truth is that if this is already the best we can do, obviously, the best is far from good enough.

Even if universities would one day manage to keep as many women in STEM as possible, they can never make up for the loss of the majority of young women who never considered STEM as a real option for them. The inclusiveness of STEM depends on the inclusiveness of society and vice versa. For Donna Strickland to become a scientist, it mattered that she grew up in an environment where it was the norm to tell women: ‘You can do anything!’ Thus, to her ‘it never even entered my mind that I couldn’t’. After all, to champion diversity in STEM in not only important for the sake of science but for society as a whole, as Strickland puts it: ‘The world works best if we all get our opportunities.’[11]

[3] Cf. Fara, Patricia (2017): A Lab of One’s Own: Science and Suffrage in the First World War. Oxford: Oxford University Press

[11] Interview with Donna Strickland by the Nobel Prize Foundation on December 8th, 2018, https://www.youtube.com/watch?v=fMRJTve47Lw